Jim Adams is our host and this was the first song that came to mind with this week’s theme to find songs with recognizable intros suggested by Clive from Take It Easy. 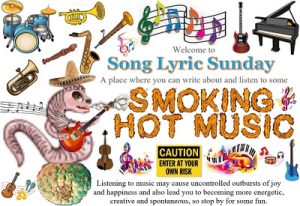 One of my favourite Bowie songs and the lyrics are in the clip.

“Sound and Vision” is a song by English musician David Bowie. It was released in January 1977 by RCA Records on side one of his 11th studio album Low. RCA later chose it as the first single from the album. Co-produced by Bowie and Tony Visconti, the song was recorded at the Château d’Hérouville in Hérouville, France, in September 1976, and completed at Hansa Studios in West Berlin in October and November. The song began as a simple G major chord progression that Bowie gave to the backing musicians, writing and recording his vocals afterward. It features backing vocals from Brian Eno and Visconti’s then-wife Mary Hopkin.

Released as a single on 11 February 1977, “Sound and Vision” was a commercial success, making number three on the UK Singles Chart, aided by its appearance in BBC television commercials. It peaked at number 69 on the Billboard Hot 100, signalling Bowie’s commercial downturn in the US until 1983. Music critics and biographers consider “Sound and Vision” one of Bowie’s greatest songs. He performed it only once on his 1978 Isolar II world tour, but frequently on later tours. Remixes of the song have been created in subsequent decades and it has appeared on several compilation albums.

I am a retired number cruncher with a vivid imagination and wacky sense of humour which extends to short stories and poetry. I love to cook and am a bit of a dog whisperer as I get on better with them than people sometimes! In November 2020, we lost our beloved Maggie who adopted us as a 7 week old pup in March 2005. We decided to have a photo put on canvas as we had for her predecessor Barney. We now have three pictures of our fur babies on the wall as we found a snapshot of Kizzy, my GSD when Hubby and I first met so had hers done too. On February 24th 2022 we were blessed to find Maya, a 13 week old GSD pup who has made her own place in our hearts. You can follow our training methods, photos and her growth in my blog posts. From 2014 to 2017 'Home' was a 41 foot narrow boat where we made strong friendships both on and off the water. We were close to nature enjoying swan and duck families for neighbours, and it was a fascinating chapter in our lives. We now reside in a small bungalow on the Lincolnshire coast where we have forged new friendships and interests.
View all posts by pensitivity101 →
This entry was posted in blogging, Challenge, music and tagged music, song lyric Sunday. Bookmark the permalink.