We took Maya up on the prom later this morning so there were a lot of people out exercising their dogs on the beach. The prom was empty so we let her off where she was content to sniff and not wander too far ahead.
We found a lovely stretch of beach which was unoccupied so went down onto the sand to let her play. We have been warned of jelly fish being washed up so didn’t want her to go down to the waters edge today, though I doubt they were like this. 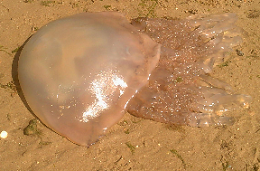 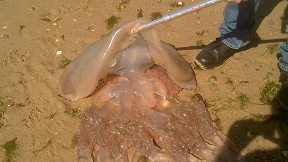 Pictures from Hamworthy in Poole, July 2015

We nearly came unstuck though as she saw a border collie and shot off like a rocket to play. We called her but we weren’t interesting enough and I had visions of a punch up, but the guy got between her and his dog and controlled the situation until we were able to clip her. He then explained his dog didn’t like shepherds, but he’d had several, one of which lived to be nearly 17, so he could see Maya was just a pup and it wasn’t aggression.
We chatted for quite a while and ended up feeding both dogs treats and giving them fuss, so it was all very civilized and polite. We were so lucky that this guy knew dogs as someone else could have caused a ruckus so we will have to be more vigilant in future.
We parted company and when they were out of sight, we turned back and let her off again. We don’t want to have to clip her all the time, but we need more control on her recall which of course we can’t practice unless we let her off. Catch 22.

Keep safe and take care everyone.

I am a retired number cruncher with a vivid imagination and wacky sense of humour which extends to short stories and poetry. I love to cook and am a bit of a dog whisperer as I get on better with them than people sometimes! In November 2020, we lost our beloved Maggie who adopted us as a 7 week old pup in March 2005. We decided to have a photo put on canvas as we had for her predecessor Barney. We now have three pictures of our fur babies on the wall as we found a snapshot of Kizzy, my GSD when Hubby and I first met so had hers done too. On February 24th 2022 we were blessed to find Maya, a 13 week old GSD pup who has made her own place in our hearts. You can follow our training methods, photos and her growth in my blog posts. From 2014 to 2017 'Home' was a 41 foot narrow boat where we made strong friendships both on and off the water. We were close to nature enjoying swan and duck families for neighbours, and it was a fascinating chapter in our lives. We now reside in a small bungalow on the Lincolnshire coast where we have forged new friendships and interests.
View all posts by pensitivity101 →
This entry was posted in current events, diary, Dogs, today is.......... and tagged day to day, general chit chat, today is........... Bookmark the permalink.