Shakespeare’s dates are one of the few things that have stayed with me (apart from unpleasant memories) from grammar school: April 23rd 1564 to April 23rd 1616.
Our teacher said how considerate he was to die on his birthday and make it easy for us to remember.
Being April 23rd, it is also St George’s Day, and there is a ‘fete’ on in the High Street which has closed the entire road so town is manic. We had to go up into town and I was lucky to find somewhere to park, though an idiot tried to get in behind me (his car was bigger than ours and the space too small) and her passenger asked if I could move forward. I did so as much as I dared else I’d be boxed in and after four attempts, they changed drivers and he had a go. He nearly hit us twice and I was glad to see Hubby come out of the shop albeit empty handed. I asked him to hurry up so that I could pull out altogether before disaster hit. I did a three point turn because I couldn’t get out of the end of the road, and they did thank me as I pulled away. I noticed they had parked smack in the middle of the two spaces so no-one could park either side of them.
Damn grockles. GO HOME!!!Walking Maya this morning was very good apart from a JRT that went for her and grabbed her jowl. She yelped so it let go before it could do any serious damage and I was proud that she didn’t retaliate. We knew the guy as he walks with his daughter and her two dogs, but now we can see why he doesn’t include his own. Nasty piece of work and it had started well with face kisses and waggy tails, then it started to growl and snapped at her. The owner didn’t back off though and so it went for her.
Lots of fuss when we continued our walk and we shall be avoiding him BIG TIME.

When we got back, Hubby dug over the onion patch so hopefully we’ll be able to get them in shortly, and we must start our tomatoes and cabbages off. We are late with everything so hope the cold weather is now behind us and we have a successful crop. 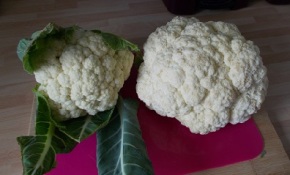 While he was doing that, Maya and I had a training session on STAY.
Hubby had re-introduced it a couple of days ago as it was something we tried at class a fortnight ago and failed! For the next half hour, I made her sit and stay, then backed away before releasing the command and calling her to me. I got her to lie down and stay as well, and eventually I was able to turn my back on her and walk away. She did not budge. I hope she remembers that for tomorrow! We have WAIT sussed as we make her wait for her dinner and if she moves, the dish doesn’t get put down. Stay and Wait are two different commands so we have to be clear what we want her to do.

I’ve walked Kela for our friend and when I got back walked Maya round the block too.
The lead work is coming along, but I’m hoping to get some tips tomorrow on stopping her from lunging. I make her sit and wait when other dogs are approaching and pass us, and also people I don’t know now after the other day. That is working, but she’s still a pup and a strong one at that.
I took these pictures yesterday. She is only five months old, honest! 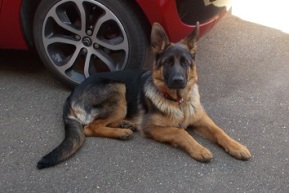 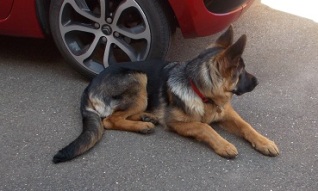 As always, take care and keep safe everyone.

I am a retired number cruncher with a vivid imagination and wacky sense of humour which extends to short stories and poetry. I love to cook and am a bit of a dog whisperer as I get on better with them than people sometimes! In November 2020, we lost our beloved Maggie who adopted us as a 7 week old pup in March 2005. We decided to have a photo put on canvas as we had for her predecessor Barney. We now have three pictures of our fur babies on the wall as we found a snapshot of Kizzy, my GSD when Hubby and I first met so had hers done too. On February 24th 2022 we were blessed to find Maya, a 13 week old GSD pup who has made her own place in our hearts. You can follow our training methods, photos and her growth in my blog posts. From 2014 to 2017 'Home' was a 41 foot narrow boat where we made strong friendships both on and off the water. We were close to nature enjoying swan and duck families for neighbours, and it was a fascinating chapter in our lives. We now reside in a small bungalow on the Lincolnshire coast where we have forged new friendships and interests.
View all posts by pensitivity101 →
This entry was posted in current events, diary, Dogs, Maya, today is.......... and tagged day to day, general chit chat, Maya, today is........... Bookmark the permalink.

9 Responses to Today is Shakespeare’s birthday