It is 7.15 in the evening and the day has gotten away from me.
It’s not as if we’ve actually had a lot to do, but after a disastrous walk with Maya this morning and not being able to hold her or get her to behave for me, I had to turn back. Hubby took her out shortly afterwards and laid down the law. We agree we have become lax in our discipline and now have our work cut out to regain the upper hand.
Maya is five months old and a demanding ‘teenager’ in doggy years, so we shall have to come down hard on misbehaviour, but maintain the rewards and praise when she’s good.
We went shopping locally in the car and she was very good, then later this afternoon Hubby walked her again and she behaved herself.
I went round to our friend and walked Kela as promised, so have got some walking in.
My feet are still sore, and yesterday afternoon’s walk with Maya was stressful as she jarred my back too. There was no reason for it, she just became difficult to handle and it rolled over to this morning.

It’s been a beautiful day so the washing has been done and dried outside. Hubby has also painted the generator box which was beginning to show signs of wear, so Maya isn’t allowed in the back garden at the moment.  Thank goodness she is now confident to wee on the front lawn (attached to me by a lead).

Lunch was a pasty for Hubby and I had a prawn and apple salad which made a very refreshing change.
I’ve also made some Hello cards this afternoon, and although they didn’t turn out as I’d hoped, I’ve made 10 to replenish my box. I shall be writing some over the weekend. 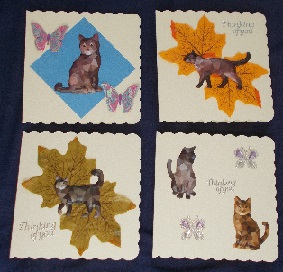 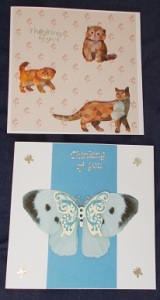 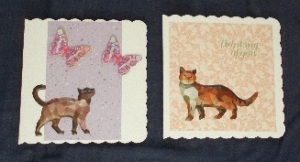 Take care and keep safe everyone.

I am a retired number cruncher with a vivid imagination and wacky sense of humour which extends to short stories and poetry. I love to cook and am a bit of a dog whisperer as I get on better with them than people sometimes! In November 2020, we lost our beloved Maggie who adopted us as a 7 week old pup in March 2005. We decided to have a photo put on canvas as we had for her predecessor Barney. We now have three pictures of our fur babies on the wall as we found a snapshot of Kizzy, my GSD when Hubby and I first met so had hers done too. On February 24th 2022 we were blessed to find Maya, a 13 week old GSD pup who has made her own place in our hearts. You can follow our training methods, photos and her growth in my blog posts. From 2014 to 2017 'Home' was a 41 foot narrow boat where we made strong friendships both on and off the water. We were close to nature enjoying swan and duck families for neighbours, and it was a fascinating chapter in our lives. We now reside in a small bungalow on the Lincolnshire coast where we have forged new friendships and interests.
View all posts by pensitivity101 →
This entry was posted in card making, current events, diary, today is.......... and tagged card making, day to day, general chit chat, today is........... Bookmark the permalink.