Frank aka PCGuyIV is out host for Truthful Tuesdays. 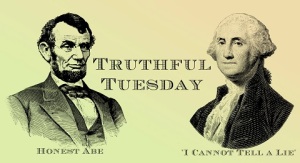 His question this week:
Have you ever felt that one particular activity seemed to be consuming more of your life than you were happy about? Was it work, a hobby that got out of hand, health concerns or something else? Lastly, have you managed to take back control, or does it still seem to be running the show, as it were?

My answer:
One of the reasons we left Poole was because we were expected to live our lives for other people, there for their convenience.
We both held down busy jobs so we tried to cram in as much ‘Us Time’ as we could at the weekend. Sunday was always our day, when we would load up the dog of the time and go out for a walk in the forest.  Saturdays however were used to visit family and after my FIL died in 2004, offer to take MIL shopping.

I have to confess, she was the worst, expecting us to drop everything no matter what the time to accommodate her. Shopping was always a nightmare and I have never known anyone shop in the order of their list which usually consisted of about half a dozen items.
The irony was she had a mobility scooter and would go down to the supermarket for lunch or to buy her sandwiches for the week (she hated cooking), but never thought to shop for the basics preferring sweets, cakes and chocolate to snack on. So, when either of us took her shopping, we would walk her up and down every aisle and stock up her cupboards and freezer accordingly. Sweets, cakes and chocolate still took up a lot of trolley space though.

One weekday evening when it was chucking it down with rain, we had a phone call asking us to go up and put her bin out for collection the following day.  It would have been a 25 mile round trip for something she could easily do herself, or ask a neighbour for that matter, in less than five minutes. Hubby said No and all hell let loose.

We decided to follow a dream after I took early retirement in 2006 and left the area in 2007. OK, it didn’t work out but we owed it to ourselves to try.
Certain family members never forgave us, accused us of desertion, shirking our responsibilities, not caring, and being selfish. None appreciated the time or distance involved for us to visit, and things got progressively worse as people brooded, sulked, and whined to anybody who’d listen. We did the best we could when we could, but our own health and well being had to be taken into account. Visits weren’t as often as we would have liked as it was a round trip of over 500 miles that had to be done in one day.

OK, maybe moving away was a little drastic in order to find peace of mind and regain control of our lives, but not once did anyone offer/ask to visit us apart from my Mum who would come up on the coach for a holiday for a month or so once or twice a year.
As usual, we were expected to do all the running, just as we had when we were local.
I can count on one hand the number of times we were visited then, and that was only because they wanted something for nothing.

There is just the two of us now and no reason for us to visit Down South. We have a life here, I think a good life, friends, and people who know and care about us. Family are names on envelopes at Christmas or the occasional birthday, but in most instances there, that is still one sided. It’s sad, but just the way it is.

I am a retired number cruncher with a vivid imagination and wacky sense of humour which extends to short stories and poetry. I love to cook and am a bit of a dog whisperer as I get on better with them than people sometimes! In November 2020, we lost our beloved Maggie who adopted us as a 7 week old pup in March 2005. We decided to have a photo put on canvas as we had for her predecessor Barney. We now have three pictures of our fur babies on the wall as we found a snapshot of Kizzy, my GSD when Hubby and I first met so had hers done too. On February 24th 2022 we were blessed to find Maya, a 13 week old GSD pup who has made her own place in our hearts. You can follow our training methods, photos and her growth in my blog posts. From 2014 to 2017 'Home' was a 41 foot narrow boat where we made strong friendships both on and off the water. We were close to nature enjoying swan and duck families for neighbours, and it was a fascinating chapter in our lives. We now reside in a small bungalow on the Lincolnshire coast where we have forged new friendships and interests.
View all posts by pensitivity101 →
This entry was posted in blogging, Challenge, questions and answers and tagged Truthful Tuesday. Bookmark the permalink.