My take on Boats

How could I not take part in KL’s challenge this week, though the boats in her photo are nothing like the narrow boat we lived on for almost three years. 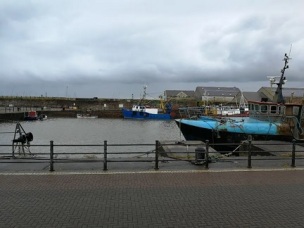 For visually challenged writers, the image shows two bobbing boats beside a footpath and some railings.

When we decided to downsize, a modest property with two bedrooms and a small garden was our intention. We disposed of most of our excess furniture from the cottage (three bedrooms, two reception rooms and a conservatory) by donating it to charity, keeping enough to furnish our next home.
Except it didn’t work out that way.

Downsizing is one thing, but we went to extremes and ended up in a thimble, having to dispose of everything except what was most precious to us. Even then a few things got sent to charity by mistake and when realised, it was too late to retrieve them.

I have never been a fan of boats. I remember my father had a small one but can’t remember what or ever being in it, and my brother was the harbour’s Water Taxi for a few years before he emigrated to NZ.
On my trip there in 2010, we went fishing on this:

The boating life taught us a lot. We discovered that the reason our friendships had failed in the past was in fact nothing to do with us as people, but our choices of those we called ‘friends’ who were no more than acquaintances using us for their own convenience. The NO word became the kiss of death to so-called friendships and we were dropped like hot potatoes.
Having a boat changed all that. It didn’t matter what car you drove, how rich you were or what your status was in life, owning a cruiser, row boat, wide beam or narrow boat like ours gave you something in common…. a boat. Conversations started, help and advice was offered, friendships blossomed and we felt part of a community.

Looking at KL’s picture reminds me of my home town and the Quay, where fishing boats, trawlers and pleasure cruisers to Brownsea Island docked. I remember my parents buying winkles and sprats freshly caught for our Saturday tea, and the smell of cockles and mussels being sold from carts. The Quay is now home to Sunseeker yachts, and I remember telling my Mum that our 41 footer would fit several times into one of the Gin Palaces selling for millions.

The life was good, and puttering up river, you saw more of nature than you would ever see from the road. A trip from the marina to Stratford Upon Avon would take about an hour in the car, but by boat? Four days passing through 17 locks. Birdsong, the dawns and sunsets were like nothing else, and the peace and tranquility second to none.

When we stopped for the night at one of the lock moorings, Hubby would sketch and I would write poetry or read. Maggie loved it too and was content to snuggle between us on the bench seats and at night would settle into the bottom corner of the bunk as soon as her blanket was in position. 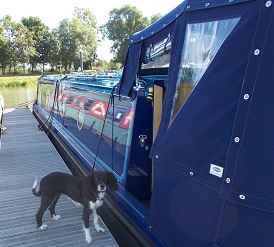 I am a retired number cruncher with a vivid imagination and wacky sense of humour which extends to short stories and poetry. I love to cook and am a bit of a dog whisperer as I get on better with them than people sometimes! In November 2020, we lost our beloved Maggie who adopted us as a 7 week old pup in March 2005. We decided to have a photo put on canvas as we had for her predecessor Barney. We now have three pictures of our fur babies on the wall as we found a snapshot of Kizzy, my GSD when Hubby and I first met so had hers done too. On February 24th 2022 we were blessed to find Maya, a 13 week old GSD pup who has made her own place in our hearts. You can follow our training methods, photos and her growth in my blog posts. From 2014 to 2017 'Home' was a 41 foot narrow boat where we made strong friendships both on and off the water. We were close to nature enjoying swan and duck families for neighbours, and it was a fascinating chapter in our lives. We now reside in a small bungalow on the Lincolnshire coast where we have forged new friendships and interests.
View all posts by pensitivity101 →
This entry was posted in blogging, Challenge, Just a thought, My life, narrow boat, photoprompt and tagged #write photo, photoprompt. Bookmark the permalink.

24 Responses to My take on Boats