KL Caley is our host for the Thursday Write Photo challenge. You can find out more and join in here 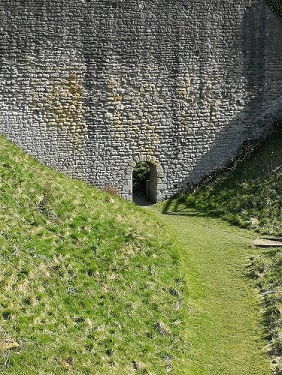 Through – Image by KL Caley

For visually challenged writers, the image shows an archway in a large stone wall.

Sam was more animated than Terry could remember.
‘I tell you, it’s brilliant!’ he said enthusiastically.
‘I can’t possibly see how.  I mean, it’s a crazy idea, and how, pray tell, are you going to fund this ‘wondrous’ thing?’
‘You know, you put a damper on everything Terry, but I tell you, this will work. I’ll be rich!’
‘Well you won’t stand a chance unless you can get started, so what do you want me to do?’
‘Design. You’re so terrific with that kind of challenge. I’ll put forward the ideas and you can design the layout, with twists, turns, hoops, tunnels and archways.’
Terry was still not convinced, but she thought she’d give it a shot. She had nothing better to do.

As things turned out, Sam was onto a winner and the local park owners were thrilled with the novelty course.
Over nine holes, each with a different theme ranging from clock towers to castles,  shop entrances and several back door exits, who would’ve thought Crazy Golf would take off.

I am a retired number cruncher with a vivid imagination and wacky sense of humour which extends to short stories and poetry. I love to cook and am a bit of a dog whisperer as I get on better with them than people sometimes! In November 2020, we lost our beloved Maggie who adopted us as a 7 week old pup in March 2005. We decided to have a photo put on canvas as we had for her predecessor Barney. We now have three pictures of our fur babies on the wall as we found a snapshot of Kizzy, my GSD when Hubby and I first met so had hers done too. On February 24th 2022 we were blessed to find Maya, a 13 week old GSD pup who has made her own place in our hearts. You can follow our training methods, photos and her growth in my blog posts. From 2014 to 2017 'Home' was a 41 foot narrow boat where we made strong friendships both on and off the water. We were close to nature enjoying swan and duck families for neighbours, and it was a fascinating chapter in our lives. We now reside in a small bungalow on the Lincolnshire coast where we have forged new friendships and interests.
View all posts by pensitivity101 →
This entry was posted in blogging, Challenge, photoprompt and tagged #write photo, photoprompt. Bookmark the permalink.

21 Responses to Write Photo: Through