The month is in double figures and galloping away. It is nearly 4pm and I have just accessed my blog.
We have actually had a good morning having our field trip and getting the things we wanted, though not exactly what we had in mind.
We’d purchased four coat racks for a pound each when we arrived here as there was no storage and nowhere to hang our coats. Hubby put one up in the hall and one on the backs of the bedrooms and boiler room doors. Lately, he has been getting really frustrated because the little four hook rack was forever double stacked and you know what it’s like, the thing you want is always on the bottom.

So, the plan was to buy another four hook rack and put it up alongside the one in the hall. Easy.
Not.
Could we find one? That would be a No then, though after five shops with zero and a sixth that came close for a tenner, Hubby bought a strip of wood and some individual coat hooks for nine pounds. Two sets of double hooks have been taken off the racks we had and put on said piece of wood, and four individual hooks on the least occupied door rack. Sorted.

We did a little bit of shopping and on the way home stopped at the garage where they did MOTs. We usually booked the I10 in for an MOT and service at the garage further down the road getting a courtesy car for the day, but the MOT itself was done in this one. In 2020, with Covid we were lucky to get one and changing the car last year meant we didn’t have to use their services in September, so we don’t know if they still provide one. We have checked around and found that they were charging an extra £10 per MOT and as much as £40 more on a basic service. The service on the Picasso isn’t due until April, but the MOT expires on Feb 10th, so we can have it MOT’d up to a month before and not lose our date. 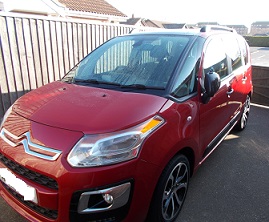 The young girl on reception could not have been more helpful, cheerful and proficient.
The car is now booked in for Jan 20th when they will collect it and bring it back when ready so we don’t have to hang around or have the bother of making our way home to wait. Any minor reasons for a failure can be done the same day but as our mileage is still low, she didn’t think there would be a problem. We can book the service in with them at a later date or go to our friendly guys where we got the tyres and wait.  The problem with getting both done at the same time with them was a wait of at least 5 hours, and with nowhere to go, nothing to see, and no shops, all makes for a dull and wasted day.

Lunch was the last of the spaghetti bolognese sauce from yesterday which Hubby had with rice and I had some tri coloured pasta. It was OK, but the pasta is better baked than boiled.  Still a syn free dinner though.

Hope your day is going well. Take care and keep safe everyone.

I am a retired number cruncher with a vivid imagination and wacky sense of humour which extends to short stories and poetry. I love to cook and am a bit of a dog whisperer as I get on better with them than people sometimes! In November 2020, we lost our beloved Maggie who adopted us as a 7 week old pup in March 2005. We decided to have a photo put on canvas as we had for her predecessor Barney. We now have three pictures of our fur babies on the wall as we found a snapshot of Kizzy, my GSD when Hubby and I first met so had hers done too. On February 24th 2022 we were blessed to find Maya, a 13 week old GSD pup who has made her own place in our hearts. You can follow our training methods, photos and her growth in my blog posts. From 2014 to 2017 'Home' was a 41 foot narrow boat where we made strong friendships both on and off the water. We were close to nature enjoying swan and duck families for neighbours, and it was a fascinating chapter in our lives. We now reside in a small bungalow on the Lincolnshire coast where we have forged new friendships and interests.
View all posts by pensitivity101 →
This entry was posted in diary, today is.......... and tagged day to day, general chit chat, today is........... Bookmark the permalink.