Fandango is our host for the Provocative Question every Wednesday.
This week:

“A massive seven out of ten people are unhappy with the homes they live in.”

That took me by surprise, as I — and most of the people I personally know — don’t outwardly appear to be unhappy with their current abodes.

So my provocative question for you this week is this:

This is our seventh property, and would I call it Seventh Heaven? Probably not.

We have said with two previous properties that if we could just pick it up and move it elsewhere, it would be perfect. But as we don’t have a Star Trek transporter or had the means to dismantle it to rebuild on another site, moving was the only option.

We moved from the cottage in 2014 with the intention of downsizing as it was too big.
A two bedroom bungalow was the idea, but we ended up on a 41 foot narrow boat so had to get rid of practically everything. We were liveaboards for almost three years and I would not change that time for anything as we met some wonderful people and led a good simplistic life. 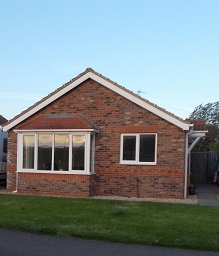 Photo October 2017
This is our current house, a modest 2 bedroom detached bungalow.
When we sold the boat, we had limited funds to play with, and that had to not only buy the property and cover our legal fees, but also to furnish it.
It didn’t help that we needed a new boiler and that took the remainder of our budget so it was a gradual process. 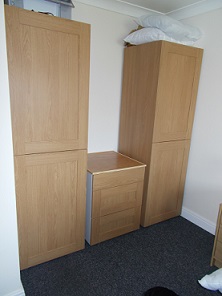 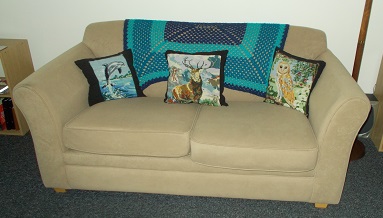 The kitchen was fully fitted, but the cooker wasn’t brilliant and that was replaced in April 2018. The freezer also failed, and we had to replace one of the window panes.
We’ve more or less got it the way we want now, and made the most of the storage space we have, which wasn’t a lot and Hubby recycled the cupboards we’d purchased for the bedroom into this

Our home is big enough for the two of us, but there are a few things we wish we had, like a garage or even a car port. Hubby now has his shed though, so the roof isn’t quite so choc-a-bloc. The kitchen is a little on the small side when there are two of you in it (we actually managed better on the boat), but it is workable. We replaced the worktops, sink and tap three years ago and have now reverted back to a gas hob and electric oven.

The spare bedroom is only a single, though how they could say it was a double is beyond me, but since turning the bed 90º we have more space and Hubby has his CB radio set up in it.
The biggest thing we regret though is not having a fireplace. We had a log burner in the cottage and it was wonderful. There is nowhere to put one here unless we move our display cubes and reorganise the lounge to vacate an outside wall. Problem there is where to put the cubes.

Saying that though, this house is extremely economical to run. The insulation is the best we’ve ever known, and it is warm, welcoming and cosy when you come in from the cold.
Being on a limited income, it has become important to ascertain that should something happen to one of us, the other could continue to live here on their own with no hardship (government permitting) thus not having the worry of meeting bills, getting into debt and potentially losing their home.
Our healthcare here sucks, but we put up with it for years because there was no alternative, but after one cock up too many we’d had enough and were lucky to be able to move to another surgery, although we are out of their catchment for home visits. While we can both drive, this is not a problem, but should that change, then we will have to think about moving closer to the surgery and hospitals.
On our list for a new home which again would be a bungalow, would be:

Another thing to consider would be 3 bedrooms, one of which could be used as a dining room if the kitchen wasn’t big enough to have a dining area.

I am a retired number cruncher with a vivid imagination and wacky sense of humour which extends to short stories and poetry. I love to cook and am a bit of a dog whisperer as I get on better with them than people sometimes! In November 2020, we lost our beloved Maggie who adopted us as a 7 week old pup in March 2005. We decided to have a photo put on canvas as we had for her predecessor Barney. We now have three pictures of our fur babies on the wall as we found a snapshot of Kizzy, my GSD when Hubby and I first met so had hers done too. On February 24th 2022 we were blessed to find Maya, a 13 week old GSD pup who has made her own place in our hearts. You can follow our training methods, photos and her growth in my blog posts. From 2014 to 2017 'Home' was a 41 foot narrow boat where we made strong friendships both on and off the water. We were close to nature enjoying swan and duck families for neighbours, and it was a fascinating chapter in our lives. We now reside in a small bungalow on the Lincolnshire coast where we have forged new friendships and interests.
View all posts by pensitivity101 →
This entry was posted in blogging, questions and answers and tagged #FPQ, fandango's provocative question. Bookmark the permalink.