Our walk in the woods : 2nd January

The car park today was packed, and I mean PACKED.
In all the years we have been to the woods, we have never known it to be as busy as it was today. I was turning the car round to leave when someone pulled away so we took their vacated space.

There were a lot of people heading towards the main path, so we went along the perimeter fence, which as usual was a bit muddy underfoot because of the recent rain and dogshit alley. There are no bins here, and it is not unusual to see bushes adorned with brightly coloured poo bags, or poo bags slung in gullies or into the undergrowth. That is of course by those who actually clear up after their dogs. At least 50% of visitors don’t.

Anyway, by the time we’d cleared the poo slalom and met up with two shaggy and muddy goldendoodles plus a trio of elderly dogs of various breeds who were all up for fuss, we were soon on one of the back tracks and there was no-one in sight.

Maggie loved it here. She was free to roam to her heart’s content, but she never ran off or went too far away. She would quarter every inch of an area abundant in smells of squirrels, deer, rabbits and foxes, and if there were any birds to lift, she’d flush them out, wagging her tail in joyful glee at her success.

We noticed a couple moving away from us towards the top end of the plantation, and they had a big dog that was having a whale of a time. Putting the camera on zoom I could see it was a german shepherd and I reduced the zoom to snap this because of the beautiful colours.

We know the paths so well, and sometimes we would park in the lay-by at the top end and walk down for a change, but we didn’t come in that way today.
We passed places where we ‘borrowed’ a rhododendron cutting that flourished in the cottage front garden, and areas where we used to sit on fallen logs and watch the sheep in the fields on the outskirts. They were always so clean and white, we wondered if they took regular dips in the huge lake. 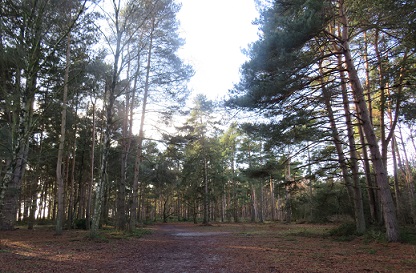 We never got lost, even if we took twists and turns cutting through the trees rather than sticking to the regular routes, Maggie always leading the way.
We have a lot of happy memories here. I came on my own several times when I had something on my mind or when Hubby was in hospital. I was never worried and felt totally safe. 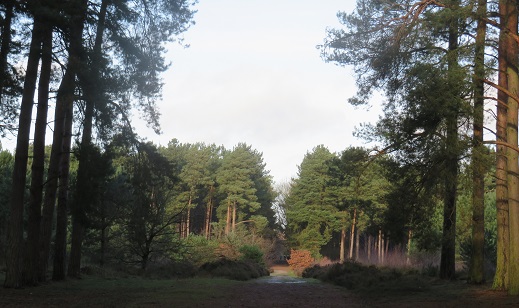 Humphrey’s Stump is still there, but looking worse for wear as it has rotted and decayed. We wonder if Humphrey is still around as we moved away in 2014 and he was about 6 then.

The deadly silence we remember from those times was haunting as so much natural habitat had been destroyed, it was devastating and bleak.
The wind today was whispering through the trees, its messages accompanied by birdsong, so beautiful to hear.  The forest is recovering.

I am a retired number cruncher with a vivid imagination and wacky sense of humour which extends to short stories and poetry. I love to cook and am a bit of a dog whisperer as I get on better with them than people sometimes! In November 2020, we lost our beloved Maggie who adopted us as a 7 week old pup in March 2005. We decided to have a photo put on canvas as we had for her predecessor Barney. We now have three pictures of our fur babies on the wall as we found a snapshot of Kizzy, my GSD when Hubby and I first met so had hers done too. On February 24th 2022 we were blessed to find Maya, a 13 week old GSD pup who has made her own place in our hearts. You can follow our training methods, photos and her growth in my blog posts. From 2014 to 2017 'Home' was a 41 foot narrow boat where we made strong friendships both on and off the water. We were close to nature enjoying swan and duck families for neighbours, and it was a fascinating chapter in our lives. We now reside in a small bungalow on the Lincolnshire coast where we have forged new friendships and interests.
View all posts by pensitivity101 →
This entry was posted in current events, Just a thought, My life, nature, observations, Personal Thoughts, Photos, Walk Thoughts, walks and tagged memories, walk, woods. Bookmark the permalink.

9 Responses to Our walk in the woods : 2nd January