Lauren is our hostess this week as she alternates with Maggie. You can find out more and join in with her blog hop here 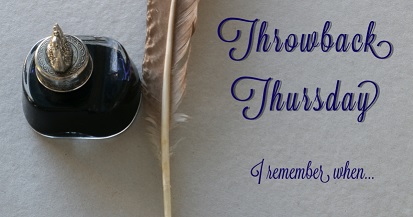 Memories of being Naughty and Nice as a kid

No one is ever perfect. Kids do things, often egged on by peers and siblings, that they probably shouldn’t do. Kids can also partner with friends to be kind. Parents are often focused on their child’s friends because they want good role models for their kids. No one wants the neighborhood bully as a role model for their sweet baby.

As a child did you consistently get involved with shenanigans? Was there one time when in particular, that you can remember doing something you regretted? Did your parents know, or were you able to keep it a secret?  Were you often mischievous as a child?  Did you change your typical behavior if a birthday or holiday was near, hoping to win the favor of your parents?

Now think about times you were particularly nice. Or think about something someone did for you that was nice, when you were growing up. Did you show off your “niceness” for relatives or adults when asked to be good by your parents?  What characteristics do you think makes a kid “nice?” What about a teenager? Were there different expectations as you grew up?

I hope I do not come across as a goody two shoes, because I don’t think I was!
I can’t remember ever getting into trouble as a kid, well apart from hanging out of the kitchen window and Bro smacking my backside. I didn’t belong to a gang either in the neighbourhood or at school, but I did dab paint on the neck of a boy called Colin and got told off by teacher for it.
I was I suppose a considerate child, brought up to say please and thank you, and think about other people. When we had a series of power cuts in the 1960s, I went over to the old ladies across the road to make sure they had candles or torches and were OK.

I can still see my Dad’s fork half way to his mouth in 1981 when I announced I was leaving my job and moving in with a guy and his two kids. My divorce had been finalised a few months before and although Dad didn’t say anything, the pause in that simple movement was enough to know he wasn’t thrilled at the idea. I was told that I would always be welcome and that this was my home, but I could not expect to move out and then back in when things didn’t work out. My Dad had sussed the guy out and didn’t like him, but never said a word against him or my choice until it all went pear-shaped nearly 8 years later and I left the relationship. I moved in with Bro then taking my dog Kizzy with me as Mum and Dad couldn’t put me up this time. When I met Hubby, both of my parents liked him immediately, and Dad knew I’d found someone special and that he’d look after me.

My music has apparently been a source of pleasure for many people, especially as I used to play at the working men’s club on a Wednesday evening and the old boys would sing along over a pint, game of darts or shove ha’penny. The old lady next door to Mum and Dad let me play her piano until ours was taken out of storage. I have happy memories of similar instances and at home would love to hear Mum singing along to the old favourites from the musicals.

Years ago, Hubby bought this for me to hang on the door. We know it’s here somewhere (this is our current front door), but can’t find it. 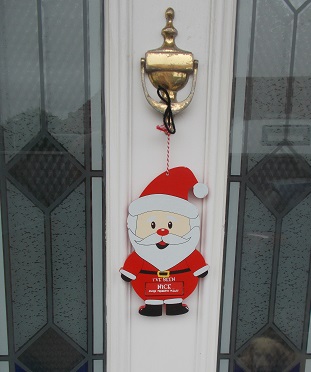 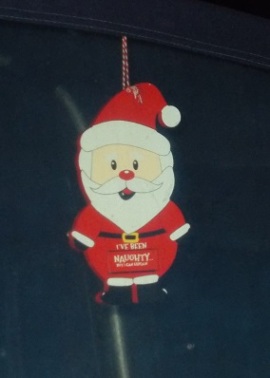 It has a flip middle, one side saying “I’ve been nice, please leave presents” and the other “I’ve been naughty but I can explain”.

I am a retired number cruncher with a vivid imagination and wacky sense of humour which extends to short stories and poetry. I love to cook and am a bit of a dog whisperer as I get on better with them than people sometimes! In November 2020, we lost our beloved Maggie who adopted us as a 7 week old pup in March 2005. We decided to have a photo put on canvas as we had for her predecessor Barney. We now have three pictures of our fur babies on the wall as we found a snapshot of Kizzy, my GSD when Hubby and I first met so had hers done too. On February 24th 2022 we were blessed to find Maya, a 13 week old GSD pup who has made her own place in our hearts. You can follow our training methods, photos and her growth in my blog posts. From 2014 to 2017 'Home' was a 41 foot narrow boat where we made strong friendships both on and off the water. We were close to nature enjoying swan and duck families for neighbours, and it was a fascinating chapter in our lives. We now reside in a small bungalow on the Lincolnshire coast where we have forged new friendships and interests.
View all posts by pensitivity101 →
This entry was posted in blogging, Memories and tagged #IRememberWhen, #TBTMemory, Throwback Thursday. Bookmark the permalink.