The day has started wet and chilly as it’s been raining heavily since around 5am.
Hubby had intended working in the garden today now that we had the rest of the required paving slabs to put under the Mini Man Cave. Ho hum. Not today then.

Isn’t it funny how labels given to things tend to stick? Storage here, both inside and out, is minimal as there were no built-in wardrobes or outbuildings when we moved here.
We bought a ‘Man Cave’ for the lawn mower which we still have for the same reason

and then added the Mini Man Cave which is more like a large foot locker. Now of course Hubby has his shed

and he built in our wardrobes using the original larder cupboards we’d bought. 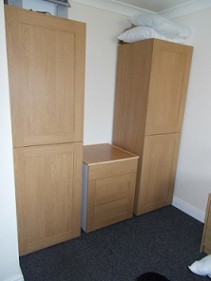 As I type, the sun has come out and gone in again, clouds are rolling in from the sea, and it looks like we are in for a dismal day.
Hubby intends to harvest our leek, which is the last of our produce this year. They have taken an age to grow, but there is only one of any significance. I take my hat off to the farmers here who grow them, and have a very fond memory of asking one if he could spare a couple for our stew one day when we were living in the cottage. He gave me an armful and I had to give some back as no way would I use them all. As it turned out, I made leek and potato soup as well as the stew and froze the rest.

Have a good day everyone. Take care, and above all, keep safe.

I am a retired number cruncher with a vivid imagination and wacky sense of humour which extends to short stories and poetry. I love to cook and am a bit of a dog whisperer as I get on better with them than people sometimes! In November 2020, we lost our beloved Maggie who adopted us as a 7 week old pup in March 2005. We decided to have a photo put on canvas as we had for her predecessor Barney. We now have three pictures of our fur babies on the wall as we found a snapshot of Kizzy, my GSD when Hubby and I first met so had hers done too. On February 24th 2022 we were blessed to find Maya, a 13 week old GSD pup who has made her own place in our hearts. You can follow our training methods, photos and her growth in my blog posts. From 2014 to 2017 'Home' was a 41 foot narrow boat where we made strong friendships both on and off the water. We were close to nature enjoying swan and duck families for neighbours, and it was a fascinating chapter in our lives. We now reside in a small bungalow on the Lincolnshire coast where we have forged new friendships and interests.
View all posts by pensitivity101 →
This entry was posted in current events, diary, today is.......... and tagged day to day, general chit chat, today is........... Bookmark the permalink.