The ducks are back!

Some time ago, we purchased a large 25kg sack of bird seed, and the wild birds here don’t like it. The pigeons do, and as such, Portly and Breast are strutting their stuff on our bird table, one hitting the bird feeder whilst the other gobbles up the fallen seed. We have seen the fence shudder when they land on it, and if they actually sit on the washing line, it bows a good few inches and it’s a surprise that one isn’t catapulted into orbit when the other takes off.

However, I digress a little.
We know that the ducks like this seed so today we filled a large poo bag (yes we still have boxes of them in the cupboard) and went trotting off to the park.
As we entered, there were no ducks anywhere.

We walked round the lake perimeter and down by the bridge we found a small group and took a seat. 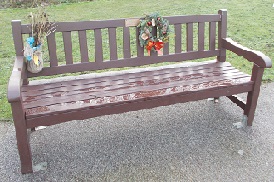 We scattered some seed and had a few takers, then suddenly we were swamped. 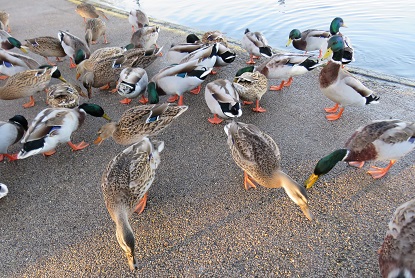 There was a solitary moorhen on the water who came out to see what was going on.
It kept away from the ducks and the pair of Canada geese that were muscling in (we let them off as one has a damaged wing and cannot fly and the other is his mate), so it didn’t feed, but I did get some pretty decent shots of it. 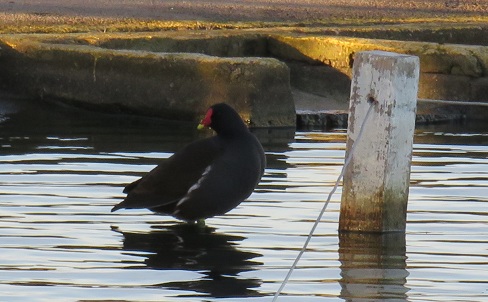 It was a nice and refreshing walk, and good to see the ducks back. Sadly though there was no sign at all of Geraldine. 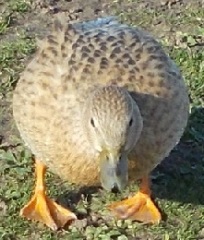 I am a retired number cruncher with a vivid imagination and wacky sense of humour which extends to short stories and poetry. I love to cook and am a bit of a dog whisperer as I get on better with them than people sometimes! In November 2020, we lost our beloved Maggie who adopted us as a 7 week old pup in March 2005. We decided to have a photo put on canvas as we had for her predecessor Barney. We now have three pictures of our fur babies on the wall as we found a snapshot of Kizzy, my GSD when Hubby and I first met so had hers done too. On February 24th 2022 we were blessed to find Maya, a 13 week old GSD pup who has made her own place in our hearts. You can follow our training methods, photos and her growth in my blog posts. From 2014 to 2017 'Home' was a 41 foot narrow boat where we made strong friendships both on and off the water. We were close to nature enjoying swan and duck families for neighbours, and it was a fascinating chapter in our lives. We now reside in a small bungalow on the Lincolnshire coast where we have forged new friendships and interests.
View all posts by pensitivity101 →
This entry was posted in ducks, nature, observations, Photos and tagged ducks, Park, photos. Bookmark the permalink.

9 Responses to The ducks are back!