Hubby has worked his socks off and the lounge has been painted in just one day. We were lucky in that we only needed the one coat as the original colour was a shade lighter than what we’d bought. The repairs have blended in well, and we only used 2 of the 3 cans purchased. We could take the third one back, but if we needed to touch up the walls for any reason, we’ve decided to keep it as they are all the same colour code.

We paid more than we have in the past for a washable paint suitable for kitchens. It was on special offer at £8 a tin instead of £12 for 2.5 litres. Coverage was good, but misleading as one tin only did our biggest wall and part of another, which was no way near the 30 square meters it said on the tin. Saying that though, it wasn’t sloppy and rollered well.
Hubby has now put batten on the floor for the settee rollers to butt up against rather than have the backs mark the walls which is why we had to decorate in the first place.
Although I didn’t do much apart from help move furniture, act as gopher, provide damp cloths when necessary and keep the decks clear, in between I managed to get the week’s washing done and out on the line as well as cook dinner, which today was a spaghetti bolognese. There was enough mix for two days so I shall either make a cottage pie, chili, or have it with jacket potatoes tomorrow.

Total cost for today was around £25 for two tins of paint, 2 rollers/trays @ £2 each, 3 dustsheets, and a couple of rolls of masking tape in case we didn’t have enough.

The pictures and other wall ornaments will go back up tomorrow. 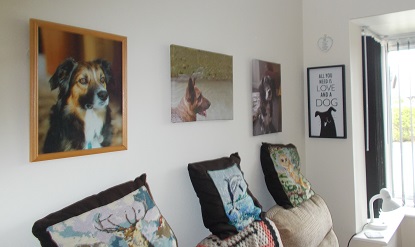 I am a retired number cruncher with a vivid imagination and wacky sense of humour which extends to short stories and poetry. I love to cook and am a bit of a dog whisperer as I get on better with them than people sometimes! We have recently lost our beloved dog Maggie who adopted us as a 7 week old pup in March 2005. We decided to have a photo put on canvas as we had for her predecessor Barney, and now have three pictures of our fur babies on the wall as we found a snapshot of my GSD so had hers done too. From 2014 to 2017 'Home' was a 41 foot narrow boat where we made strong friendships both on and off the water. We were close to nature enjoying swan and duck families for neighbours, and it was a fascinating chapter in our lives. We now reside in a small bungalow on the Lincolnshire coast where we have forged new friendships and interests.
View all posts by pensitivity101 →
This entry was posted in current events, diary, DIY, home and tagged decorating, DIY. Bookmark the permalink.

12 Responses to Done and dusted.