KL Caley is our host now for the Thursday writephoto photoprompt.
You can find out more and join in here 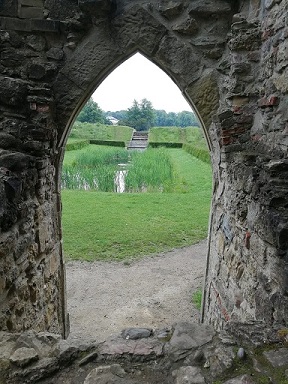 For visually challenged writers, the image shows a stone archway, through which a pond and some steps are visible.

It was an overcast day, but Anna was at a loose end and stepping through the archway decided to explore.
‘Hello,’ said a voice.
She turned and saw a young boy sitting on the bank a few yards behind her.
‘Hello,’ she replied. ‘Where are you from? I don’t remember seeing you before. This is private property you know.’
‘Really? I live here and I was going to say the same about you.’
‘What’s your name?’
‘Jack. What’s yours?’
‘Anna. How do you do?’
‘That’s all very prim and proper!  Where are you from?’
‘I live here. We arrived about a month ago.’
‘That’s odd. The cottage wasn’t for sale as far as I know.’
Anna laughed.
‘What cottage? It’s a mansion!!’
‘Erm, no, it’s a small cottage.’
‘You’re being silly. Come and look.’
Jack got off the bank and followed her to the archway in the wall.
When she looked through, she saw her home.
When Jack looked through, he blanched.
‘That’s not my house! ‘ he cried. ‘What witchcraft is this?’ then he ran away.
Anna watched him go, then with a shrug returned through the archway.

She asked her father about the pond at supper.
‘I wouldn’t go there if I were you. A child drowned so I’m having it drained and converted to tennis courts.’
‘Do you know anything else about it?’
‘Young lad I think, about your age. Happened a long time ago though and the place has seen a lot of changes. This isn’t the original property. That burnt down shortly after the accident and they built this.’
Anna wondered if she’s ever see Jack again.

I am a retired number cruncher with a vivid imagination and wacky sense of humour which extends to short stories and poetry. I love to cook and am a bit of a dog whisperer as I get on better with them than people sometimes! In November 2020, we lost our beloved Maggie who adopted us as a 7 week old pup in March 2005. We decided to have a photo put on canvas as we had for her predecessor Barney. We now have three pictures of our fur babies on the wall as we found a snapshot of Kizzy, my GSD when Hubby and I first met so had hers done too. On February 24th 2022 we were blessed to find Maya, a 13 week old GSD pup who has made her own place in our hearts. You can follow our training methods, photos and her growth in my blog posts. From 2014 to 2017 'Home' was a 41 foot narrow boat where we made strong friendships both on and off the water. We were close to nature enjoying swan and duck families for neighbours, and it was a fascinating chapter in our lives. We now reside in a small bungalow on the Lincolnshire coast where we have forged new friendships and interests.
View all posts by pensitivity101 →
This entry was posted in #flash fiction, blogging, Challenge, photoprompt and tagged #write photo, fiction, photoprompt. Bookmark the permalink.