We stood outside to pay our final respects as the hearse went by, then I took Jack for a walk.  The route should be familiar, but as with all dogs, it was pee and sniff every few yards, but I wasn’t worried.
Back home we had some lunch, then settled down to do our own thing and let Jack do his.

As expected, it took a while for him to settle, but he soon realised we weren’t a bad sort and had treats at our disposal. It didn’t take long for him to get the idea of going through the net curtain to go outside where he sniffed away and christened the buddliah again plus basically anything else sticking up that was taller than he was.

We had a variety of treats, from the small meaty nuggets that Maggie used to have to meat strips and mini marrow bone biscuits, the latter of which he buried in the garden just in case he came back.

He’s a good guard dog and barked at anyone or anything going past our house. I don’t know if the lounge is at the front or back of their house, but he was quite content to sit upright and watch through the window. We decided to put his blanket up on the settee and encourage him to sit beside me. Maggie never used to get up on the bed or bunks in either the caravan or the boat until her blanket was in place, so maybe Jack was the same. It didn’t matter as we have covers on the settees anyway, but once he knew he was allowed (we do know he sits on the furniture at home), everything was fine.

Me, my furbabies, and doggy friend.

Eventually, he could no longer keep awake and settled down to sleep. He snores, but very quietly, more like a gentle buzz, but it was obvious he was comfortable in our company and our home which was good to see.

His own ‘personal’ cushion and the land of nod…….…

We gave him his tea at 4.15. He’s a quiet and careful eater, not scoffing his food like some dogs, which again confirmed to us that he was content to be here.
He was collected just after 6.30. Everything had gone off very well and they thought it was a nice touch that all three of us had stood on the kerb earlier.

I’m glad we were able to help out at such a difficult time. With over 50 people in attendance, thankfully not all going back to the house though a fair few did, it was one less thing for the family to worry about. 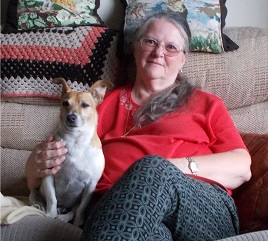 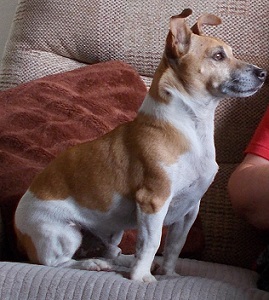 I am a retired number cruncher with a vivid imagination and wacky sense of humour which extends to short stories and poetry. I love to cook and am a bit of a dog whisperer as I get on better with them than people sometimes! We have recently lost our beloved dog Maggie who adopted us as a 7 week old pup in March 2005. We decided to have a photo put on canvas as we had for her predecessor Barney, and now have three pictures of our fur babies on the wall as we found a snapshot of my GSD so had hers done too. From 2014 to 2017 'Home' was a 41 foot narrow boat where we made strong friendships both on and off the water. We were close to nature enjoying swan and duck families for neighbours, and it was a fascinating chapter in our lives. We now reside in a small bungalow on the Lincolnshire coast where we have forged new friendships and interests.
View all posts by pensitivity101 →
This entry was posted in current events, diary, Dogs, Photos and tagged dogs, puppy sitting. Bookmark the permalink.