The Seeing Eye of Midnight

For the visually challenged writer, the photo is of a barren and weathered rocky landscape featuring a large stone arch.
The photo below is from the Google Photo Frame. 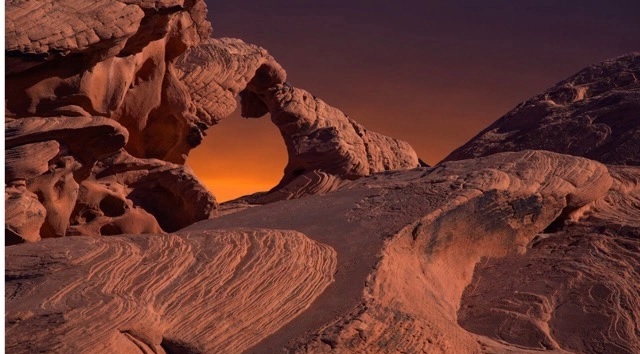 They call it The Seeing Eye of Midnight.
To approach is perilous, the rocky face alternately rippled and smoothed by time.
Look closer and you will see the remains of many who have gone before, some species not of this world, their bones cradling the dust of a million midnights.
The autumn hues of the sky beyond are hypnotising as they change constantly, a kaleidoscope of wonder beckoning a weary traveller to enter, a new victim to transport and displace into a time of darkness.
All is not as it seems. This is no ordinary landscape. This is not Earth.
This is a dead planet. Who knows if it is a look into the future of our world as we know it and a warning.
Science is a wonderful thing and as observers, much can be seen and learned of this phenomenon that appears as the clock strikes twelve. The next step is to explore and take samples……….. if they can get there.

I am a retired number cruncher with a vivid imagination and wacky sense of humour which extends to short stories and poetry. I love to cook and am a bit of a dog whisperer as I get on better with them than people sometimes! We have recently lost our beloved dog Maggie who adopted us as a 7 week old pup in March 2005. We decided to have a photo put on canvas as we had for her predecessor Barney, and now have three pictures of our fur babies on the wall as we found a snapshot of my GSD so had hers done too. From 2014 to 2017 'Home' was a 41 foot narrow boat where we made strong friendships both on and off the water. We were close to nature enjoying swan and duck families for neighbours, and it was a fascinating chapter in our lives. We now reside in a small bungalow on the Lincolnshire coast where we have forged new friendships and interests.
View all posts by pensitivity101 →
This entry was posted in #flash fiction, blogging, Challenge, photoprompt and tagged #FFFC, fandango's flash fiction challenge, photoprompt. Bookmark the permalink.

9 Responses to The Seeing Eye of Midnight