Everyone wants a piece of me.
They tear at my soul,
Not seeing the person within,
One who is timid and shy,
Afraid to speak or be seen.
I dare not voice an opinion
As someone will notice me.
Far better to sit on the boundaries
Of life and watch.
My picture is a collage:
Who I was, and who I should be.
Graphic lines cut and fold my skin
To improve, reshape, or simply remove
To achieve perfection.
In whose eyes?
Eyes that sought and changed,
Then left a shallow shell of a being
Once comfortable with herself
Now left out in the rain to bleed.
The chalks and paints are washed away
Taking my life’s force with them.
I am just a mural on a wall,
A face once familiar now lost
To time and erosion. 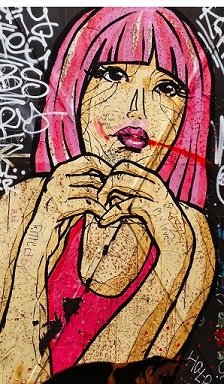 For the visually challenged reader, the image shows a woman’s painting on a wall. There are words scribbled on the sides of the wall art and people have drawn on the face too.

Written for Sadje’s What do you see #90.

I am a retired number cruncher with a vivid imagination and wacky sense of humour which extends to short stories and poetry. I love to cook and am a bit of a dog whisperer as I get on better with them than people sometimes! We have recently lost our beloved dog Maggie who adopted us as a 7 week old pup in March 2005. We decided to have a photo put on canvas as we had for her predecessor Barney, and now have three pictures of our fur babies on the wall as we found a snapshot of my GSD so had hers done too. From 2014 to 2017 'Home' was a 41 foot narrow boat where we made strong friendships both on and off the water. We were close to nature enjoying swan and duck families for neighbours, and it was a fascinating chapter in our lives. We now reside in a small bungalow on the Lincolnshire coast where we have forged new friendships and interests.
View all posts by pensitivity101 →
This entry was posted in #flash fiction, blogging, Challenge, photoprompt, Poetry and tagged #Whatdoyousee, photoprompt, poetry, wdys. Bookmark the permalink.

19 Responses to Self Portrait