I’m not a twitcher but over the years have got a lot of pleasure watching our feathered friends in the garden or hedges.

Our lounge is at the front of our property so not only do I get to see people walking by, but also the goings on in the big hedge directly opposite.
Before the original occupiers moved out in March 2020, they had the hedge cut by a ‘professional’ crew who made a great show of putting up a line as to where to cut down to. They cut off a good two feet of hedge and we could see a lot more of the conservatories on the properties over the road. However, in their gusto to cut, they hacked at the sides as well as the top to reveal dead wood and left jagged edges. It was a mess, and they evicted several birds that had nests there.

Fast forward some 16 months, and the hedge is straggly but recovering. The birds are a joy to watch and listen to as they chatter to each other under the protection of green.  I think the sparrows have nests in there as do the blackbirds, and a cheeky robin flits from hedge to our gable roof so I’m not quite sure where he calls home. I have also seen goldfinches and blue tits but not as often as when we were in the cottage where we had finches of all descriptions, and even a family of owls.

I was watching some juvenile magpies the other afternoon which gave me cause to smile. Unlike blackbirds who are doting parents to their young forever feeding fluffy quivering bodies at every tweet, these adult birds seem to totally ignore their offspring and make them fend for themselves. It was quite funny to watch the youngsters demand to be fed or acknowledged only for Mum or Dad to fly off.
Starlings are similar, and seem to ignore their young once they get to a certain size, then as soon as they start fending for themselves, the adults will feed them if they think necessary.

Although we’ve found empty eggshells in the garden, we haven’t actually seen any baby pigeons. The visitors to our garden are so fat, it’s a miracle they can take off. They are also cheeky opportunists, and will happily munch on the seed on the floor shaken from the feeder by the sparrows rather than try and perch precariously on the feeder itself.
One pigeon is a proper acrobat and will hang almost upside down from the bird table to get to the feeder. Twice I have seen it lose its balance before doing a nose dive south. Indignant and embarrassed pigeons fluff themselves up and hope no-one was watching.

I have never seen adult swans, geese or ducks feed their babies, but as this picture shows, they probably do show them what to do. 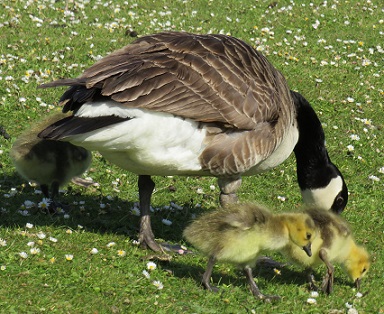 I love watching the birds. They survive in all weathers, get cold and wet and still sing their hearts out. Makes us whiny humans feel pretty humble.

I am a retired number cruncher with a vivid imagination and wacky sense of humour which extends to short stories and poetry. I love to cook and am a bit of a dog whisperer as I get on better with them than people sometimes! In November 2020, we lost our beloved Maggie who adopted us as a 7 week old pup in March 2005. We decided to have a photo put on canvas as we had for her predecessor Barney. We now have three pictures of our fur babies on the wall as we found a snapshot of Kizzy, my GSD when Hubby and I first met so had hers done too. On February 24th 2022 we were blessed to find Maya, a 13 week old GSD pup who has made her own place in our hearts. You can follow our training methods, photos and her growth in my blog posts. From 2014 to 2017 'Home' was a 41 foot narrow boat where we made strong friendships both on and off the water. We were close to nature enjoying swan and duck families for neighbours, and it was a fascinating chapter in our lives. We now reside in a small bungalow on the Lincolnshire coast where we have forged new friendships and interests.
View all posts by pensitivity101 →
This entry was posted in Just a thought, nature, observations, Personal Thoughts and tagged birds, nature, observations. Bookmark the permalink.