This week, KL has given us a photo from Willow at Willowdot21 to work with. It’s rather stunning I think!
To join in with the challenge, click here

For visually challenged writers, the image a tree that has partly been carved to represent a man (or an ape I’m undecided). 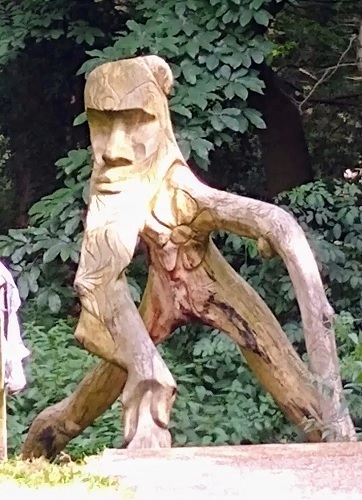 No-one knew where he had come from, or when. At first they thought him quite menacing, but as time passed, each began to see him in a different light.
To the very young, he was there to protect them from the wildness of the woods, always on the lookout, eyes darting everywhere.
To older children, he was there to climb and ride.
To the romantics, he was the blower of kisses. Pucker up and make a wish.
To the woodsman, he was a talisman of good fortune.
To the sculptor, he was a bringer of fame and potential riches.
To the animals, he was the guardian of their sanctuary.
To the trees, he was a reminder of Man’s treacherous progress.
To the Tree Man himself, he was biding his time waiting for others to join him.

I am a retired number cruncher with a vivid imagination and wacky sense of humour which extends to short stories and poetry. I love to cook and am a bit of a dog whisperer as I get on better with them than people sometimes! In November 2020, we lost our beloved Maggie who adopted us as a 7 week old pup in March 2005. We decided to have a photo put on canvas as we had for her predecessor Barney. We now have three pictures of our fur babies on the wall as we found a snapshot of Kizzy, my GSD when Hubby and I first met so had hers done too. On February 24th 2022 we were blessed to find Maya, a 13 week old GSD pup who has made her own place in our hearts. You can follow our training methods, photos and her growth in my blog posts. From 2014 to 2017 'Home' was a 41 foot narrow boat where we made strong friendships both on and off the water. We were close to nature enjoying swan and duck families for neighbours, and it was a fascinating chapter in our lives. We now reside in a small bungalow on the Lincolnshire coast where we have forged new friendships and interests.
View all posts by pensitivity101 →
This entry was posted in #flash fiction, blogging, Challenge, photoprompt and tagged #write photo, photoprompt. Bookmark the permalink.