I said earlier we were hoping to have a walk in the park and we did just that before lunch.
We were out for over an hour and there were quite a lot of people about.  There were geese everywhere and the mess is horrendous. It’s a shame the council don’t employ someone for the summer to jet wash the paths. They could use the water from the lake! 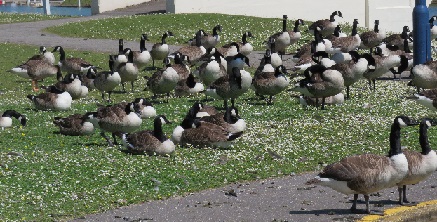 The original broods are as big as the adults now, and judging by the amount of feathers everywhere, the moult is on and they will be taking their first flights soon.

We have a new brood of ducklings, and what looks like two more hatching of goslings. I couldn’t get a picture of the ducklings as they were too well scattered, but it pleased us to see some older and bigger ones were still around. We have no idea what happened to the others and believe as many as 100 babies may have been lost again this year.

It was lovely to see the greylag family today, four babies, and only one now with an orange beak and feet.  The other family above came out of the bushes as I was snapping the greylags.
They all took to the water together, and I love the way they make creches.

We also have a new duck on the block, but there is still no sign of Geraldine. 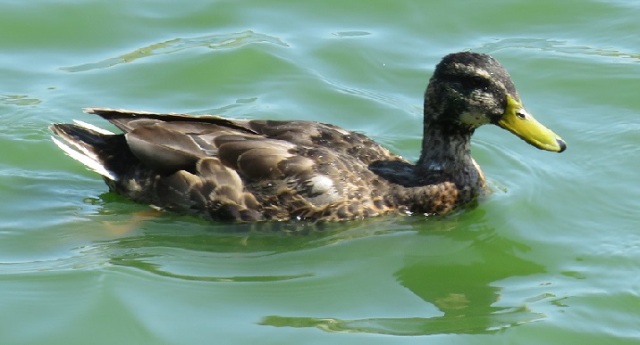 For those of you fed up with geese, we went up on the prom and I took some pictures of the glorious display of wild flowers on the bank and along the paths. 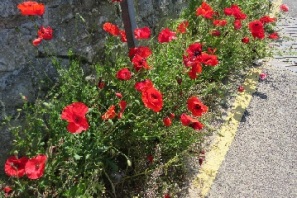 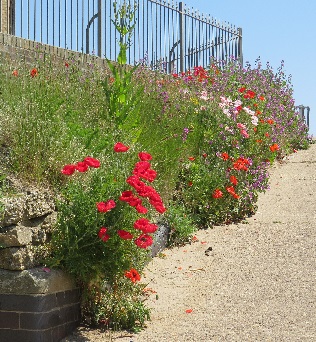 You would not believe the riot of colour along the sandy path and my pictures don’t do them justice. 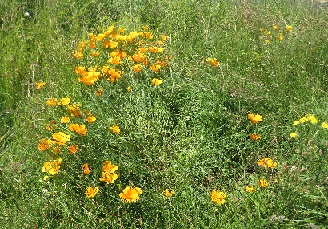 Not forgetting the beach of course, it was quiet save for late arrivals working their way down the sand with their buckets and spades. The tide was out.

The wind farm was also clearly visible. We have lost count of the number of turbines there now as they continue to extend it, but believe it to be close to two hundred.

We got home just before 1pm and Hubby had fared very well indeed.

I am a retired number cruncher with a vivid imagination and wacky sense of humour which extends to short stories and poetry. I love to cook and am a bit of a dog whisperer as I get on better with them than people sometimes! We have recently lost our beloved dog Maggie who adopted us as a 7 week old pup in March 2005. We decided to have a photo put on canvas as we had for her predecessor Barney, and now have three pictures of our fur babies on the wall as we found a snapshot of my GSD so had hers done too. From 2014 to 2017 'Home' was a 41 foot narrow boat where we made strong friendships both on and off the water. We were close to nature enjoying swan and duck families for neighbours, and it was a fascinating chapter in our lives. We now reside in a small bungalow on the Lincolnshire coast where we have forged new friendships and interests.
View all posts by pensitivity101 →
This entry was posted in beach walks, current events, diary, ducks, nature, observations, Photos, walks and tagged beach walk, geese, Park, walks. Bookmark the permalink.