Nekneeraj hosts the Tuesday Photo Challenge for MLMM.
You can find out more here

This week’s choice of image is by George Natsioulis 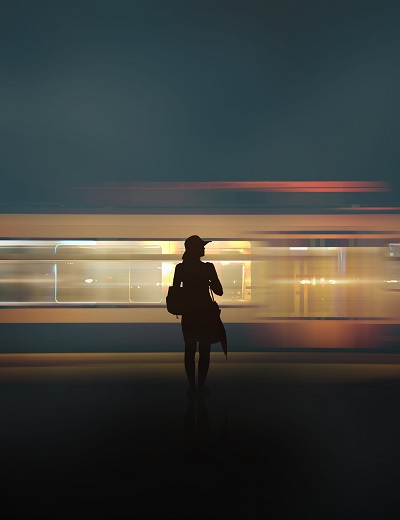 The trains passed in a blur, never slowing, never stopping.
She could see no-one within, just lights flashing by.
She’d been told to come here, to this platform and wait.
The time had never been mentioned.

She could see no-one within, just lights flashing by.
They made her dizzy, nauseous.
Would one stop long enough for her to board?
She had no idea of the time. Had she missed her connection?

She’d been told to come here, to this platform and wait.
It was completely deserted and she was totally alone.
The rumbling tone changed, a train slowed in its approach,
Stopped before her, opened its doors.

The time had never been mentioned,
She was transported back forty years,
To happier times and a second chance.
He sat where he had before, waiting for her.

I am a retired number cruncher with a vivid imagination and wacky sense of humour which extends to short stories and poetry. I love to cook and am a bit of a dog whisperer as I get on better with them than people sometimes! We have recently lost our beloved dog Maggie who adopted us as a 7 week old pup in March 2005. We decided to have a photo put on canvas as we had for her predecessor Barney, and now have three pictures of our fur babies on the wall as we found a snapshot of my GSD so had hers done too. From 2014 to 2017 'Home' was a 41 foot narrow boat where we made strong friendships both on and off the water. We were close to nature enjoying swan and duck families for neighbours, and it was a fascinating chapter in our lives. We now reside in a small bungalow on the Lincolnshire coast where we have forged new friendships and interests.
View all posts by pensitivity101 →
This entry was posted in #flash fiction, blogging, Challenge, photoprompt, Poetry and tagged Mindlovemisery’s Menagerie, MLMM, photo prompt. Bookmark the permalink.