It is 3.30 in the afternoon and I have just accessed my blog.
Hubby had an INR this morning and is still in range. He had a ‘discussion’ with the current nurse who wanted to reduce his dosage unnecessarily as it could have sent it the other way and he’d be back on tummy jabs. He has to go back next week, though will see another nurse as this one is on holiday. Our regular and efficient INR nurse is still off, and it is unclear if she will actually be coming back to our surgery. Bummer that.

He has spent the majority of the morning fixing our neighbour’s gate as the hinges had dropped. All workmen here do a grand job, that is it costs a thousand pounds for whatever you want done. Hubby replaced rusted screws, realigned the hinges then rehung the gate and all is good.

I was going to make some cards today but it is too hot and stuffy here in the lounge where I’d have to work at the table. The fan would blow everything everywhere, so I’m holding fire until a cooler day.

We had corned beef hash today for lunch followed by ice cream. We’ll have the last of the stew for our final meal around 4 pm.
On a finishing note today, I’ve counted 65 buds on the Ancient Mariner and this is what it looked like this morning: 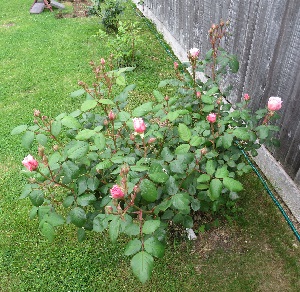 Take care everyone, and keep safe.