Roger Shipp is our host for the Flash Fiction for the Purposeful Practitioner challenge.

Our picture this week is from pixabay. 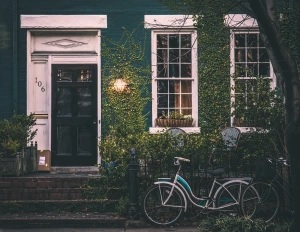 ‘I see the two bikes are outside number 106 again,’ Gladys said to Ethel.
‘Come away from the window dear, Someone might see you.’
Gladys let the curtain drop and went to sit opposite her twin sister in the matching fireside chair.
Had anyone looked in on them they would have thought it a mirror image as the old ladies always dressed alike, had the same hairstyles, and perfectly reflected each other.
Sipping her tea, Gladys looked towards the window again and moved as if to get up.
‘Don’t,’ Ethel said. ‘It’s none of our business.’
‘But I’m curious……….’ she began.
‘And we all know what happened to the cat don’t we. Now sup your tea dear, and we’ll have a nice game of rummy.’
‘But who does the blue bicycle belong to? The pink one is Mrs Radbury’s but who owns the blue one? I want to know!!’ she demanded.
Ethel was quite stunned by her sister’s heated words.
‘Whatever for? As I said, it’s none of our business. The bicycles are there every Wednesday  evening. So what if Mrs Radbury has a friend? She’s been a widow longer than I have!’
‘But who is it? Why have I never seen them? Maybe she’s having an affair!’
‘For heaven’s sake Gladys! Mrs Radbury is 73 years old and has always enjoyed getting out on her bicycle. There is nothing wrong with her having some company. Now let it rest.’
Gladys finished her tea and took the cups out into the kitchen. She came back with a pack of cards and the old ladies played three games of rummy before retiring.

Mrs Radbury went outside and brought the two bicycles inside. The pink one was hers, but the blue one was her late husband’s and she’d never wanted to part with it. It became a weekly habit to put both bicycles outside the front as they’d always done as it made her feel less lonely. Little did she know how much it tantalized the imagination of the elderly spinster now living with her sister opposite.

I am a retired number cruncher with a vivid imagination and wacky sense of humour which extends to short stories and poetry. I love to cook and am a bit of a dog whisperer as I get on better with them than people sometimes! We have recently lost our beloved dog Maggie who adopted us as a 7 week old pup in March 2005. We decided to have a photo put on canvas as we had for her predecessor Barney, and now have three pictures of our fur babies on the wall as we found a snapshot of my GSD so had hers done too. From 2014 to 2017 'Home' was a 41 foot narrow boat where we made strong friendships both on and off the water. We were close to nature enjoying swan and duck families for neighbours, and it was a fascinating chapter in our lives. We now reside in a small bungalow on the Lincolnshire coast where we have forged new friendships and interests.
View all posts by pensitivity101 →
This entry was posted in #flash fiction, blogging, Challenge, photoprompt and tagged #flash fiction, ffftpp, Flash Fiction for the Purposeful Practitioner, photoprompt. Bookmark the permalink.

14 Responses to Flash Fiction for the Purposeful Practitioner: 2021: Week #20