No, it’s not this one from our beach walks: 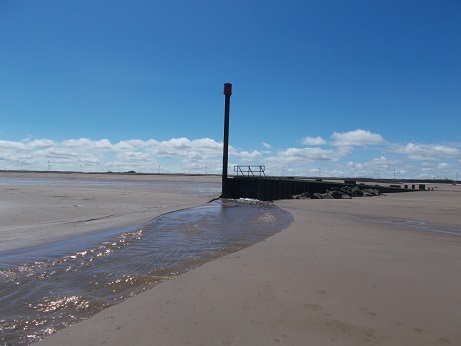 We got back from our afternoon walk and our neighbour was having her grass cut by the young lad who has a round here. She opened the gate to give him access to the back and called Hubby to come and look at it as there was a problem.
We had heard something crack in the wind last night, and having checked our fences and garden, found nothing untoward. Now the noise has been identified and it was our neighbour’s gate post finally giving up the ghost and snapping off at the bottom. The only things holding it in place was the gate itself, the fencing it was attached to, and about a dozen nails of 6 inches plus.

We are good at fixing fences and posts, so Hubby measured up, was given some cash, and we set off in the car to get a new post for the job.
Whoever put the gate and fence up did an excellent job as getting it all apart took about an hour and a half! Removing the rotten post was no problem, but getting the new one in the hole required a repair spike, so it was back down to the timber merchant to get one.
For an outlay of just under £20 and three hours of our time, the new post is in situ and the gate secure. Hubby had to modify the bolt fitting a little, but other than that, everything else lined up OK.
Our neighbour is pleased, and would like to pay Hubby for his trouble, but we don’t work like that. It was a lovely sunny day, cups of tea were forthcoming, and it was good to do something for somebody else.

I am a retired number cruncher with a vivid imagination and wacky sense of humour which extends to short stories and poetry. I love to cook and am a bit of a dog whisperer as I get on better with them than people sometimes! We have recently lost our beloved dog Maggie who adopted us as a 7 week old pup in March 2005. We decided to have a photo put on canvas as we had for her predecessor Barney, and now have three pictures of our fur babies on the wall as we found a snapshot of my GSD so had hers done too. From 2014 to 2017 'Home' was a 41 foot narrow boat where we made strong friendships both on and off the water. We were close to nature enjoying swan and duck families for neighbours, and it was a fascinating chapter in our lives. We now reside in a small bungalow on the Lincolnshire coast where we have forged new friendships and interests.
View all posts by pensitivity101 →
This entry was posted in current events, DIY, maintenance and tagged DIY, maintenance, neighbour. Bookmark the permalink.