This week Michael asks us to write about our interpretation of ‘Bookworm’. 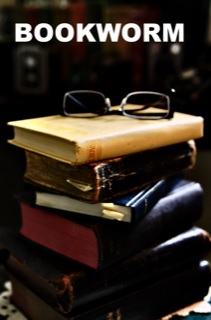 ‘Does my bum look big in this?’
‘Hm? What?’
‘I said, does my bum look big in this?’
Pete took his glasses off and laid them on top of the pile of books he was trying to get through.
‘Sorry, what did you say?’
Sheila puffed up her ample bosom and thrust her rear end embedded in chapter 6 almost in his face.
‘I SAID’, she repeated, ‘does my bum look big in this?’
Pete looked at her.
‘You’re not serious?’
‘PETER!’
Oh, he hated it when she called him that. It was a serious business being a bookworm.
There was more than reading involved you know, and some of the pages tasted funny.
‘Have you seen the title?’
‘What?’
‘Of the book you’re wearing. It’s called It’s a Bum Wrap.’
‘Dammit! Why do you always get the punch line?’
‘Cos I’m a bigger bookworm than you are dearest and tend to read more than go for a pretty picture. Fancy an apple?’
‘Ha!’ She snorted. ‘I’m not falling for that!  That’s a computer and they don’t have pages!’

I am a retired number cruncher with a vivid imagination and wacky sense of humour which extends to short stories and poetry. I love to cook and am a bit of a dog whisperer as I get on better with them than people sometimes! We have recently lost our beloved dog Maggie who adopted us as a 7 week old pup in March 2005. We decided to have a photo put on canvas as we had for her predecessor Barney, and now have three pictures of our fur babies on the wall as we found a snapshot of my GSD so had hers done too. From 2014 to 2017 'Home' was a 41 foot narrow boat where we made strong friendships both on and off the water. We were close to nature enjoying swan and duck families for neighbours, and it was a fascinating chapter in our lives. We now reside in a small bungalow on the Lincolnshire coast where we have forged new friendships and interests.
View all posts by pensitivity101 →
This entry was posted in #flash fiction, blogging, Challenge, humour, word prompt and tagged flash fiction, Mindlovemisery’s Menagerie, Tale Weaver. Bookmark the permalink.