Can’t get rid of it

We all have at least one don’t we. That special item of clothing that is just so very ‘us’, loved to pieces, brings a sense of comfort and well being, and is totally worn out.

I wrote this about my Dad’s cardy, the one my Mum knitted him for their Silver Wedding Anniversary in 1975. 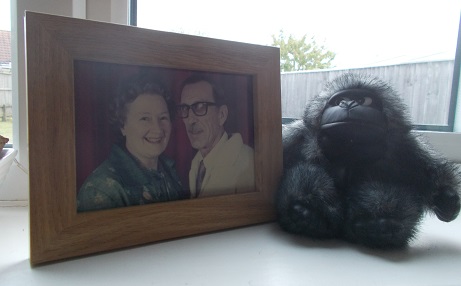 I wore it for years, and even though it is shapeless, thin and badly darned, I won’t get rid of it now as it is one of the few things of his I have. It’s packed away in a drawer and when the time comes, I shall wear it again with the pockets full of dog biscuits.
This is me wearing it when we were in the cottage.

Hubby has similar items of attire, one of which I thought I had designated to the bin, then remembered him saying to leave it out for rags.  Hm. The tee shirt in question has found its way back into the washing machine, his drawer, and remains one of his favourites.
It is tatty, blotchy, and so baggy on him now you could probably get me in it as well (very cosy and he’s grinning like a cheshire cat at the thought of it).

It reminds me of a certain tee shirt and pair of jogging trousers which had seen better days that he deliberately kept for visiting his Mum, especially as she’d been on at him for years to get a suit, and was mega miffed when he wore smart casual trousers, a coloured shirt and leather jacket for our wedding in 1991.
He knew his preferred outfit would annoy her, and as things stood between them, I can’t say I blamed him!

Oh well, the tee shirt keeps him happy, and that’s what really matters.

I am a retired number cruncher with a vivid imagination and wacky sense of humour which extends to short stories and poetry. I love to cook and am a bit of a dog whisperer as I get on better with them than people sometimes! In November 2020, we lost our beloved Maggie who adopted us as a 7 week old pup in March 2005. We decided to have a photo put on canvas as we had for her predecessor Barney. We now have three pictures of our fur babies on the wall as we found a snapshot of Kizzy, my GSD when Hubby and I first met so had hers done too. On February 24th 2022 we were blessed to find Maya, a 13 week old GSD pup who has made her own place in our hearts. You can follow our training methods, photos and her growth in my blog posts. From 2014 to 2017 'Home' was a 41 foot narrow boat where we made strong friendships both on and off the water. We were close to nature enjoying swan and duck families for neighbours, and it was a fascinating chapter in our lives. We now reside in a small bungalow on the Lincolnshire coast where we have forged new friendships and interests.
View all posts by pensitivity101 →
This entry was posted in clothes, humour, My life and tagged clothes, old favourites. Bookmark the permalink.

21 Responses to Can’t get rid of it