This week’s prompt invites you to write in the form of a mystery story that involves a “Bald Man’.
https://mindlovemiserysmenagerie.wordpress.com/2021/02/18/tale-weaver-315-mystery-the-bald-man/ 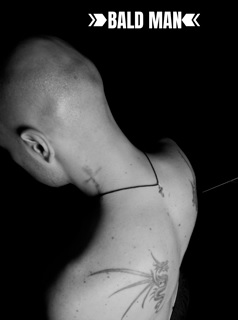 He never had a lot in the first place and was told that the shorter he kept it, the longer he’d have some.
It was no mystery that a receding hairline ran in the family, but in his case, it just kept on running. If he’d been fair-haired, it might not have been so noticeable, but when his wife had more hair on her legs than he did on his head, well, he was a little envious of the shavings left in the bathtub.
He looked longingly at pictures of dreadlocks and extensions, imagining them on his head, then realised there was nothing really to attach them to.
A ‘syrup’ was not a good idea, too obvious and expensive so he did the next best thing.
He shaved off the lot.
It opened up a new world for him, and his wife could not handle the new sex appeal it generated. Telly Savalas and Yul Brynner had a lot to answer for in the ’70s, but Vin Diesel, The Rock and Jason Statham were all current day actors with reflective bonces that the girls mysteriously drooled over.
And now he was one of them!
Jimmy Dean may have carried a comb in his pocket, but a silk handkerchief was always good for a shine!

I am a retired number cruncher with a vivid imagination and wacky sense of humour which extends to short stories and poetry. I love to cook and am a bit of a dog whisperer as I get on better with them than people sometimes! In November 2020, we lost our beloved Maggie who adopted us as a 7 week old pup in March 2005. We decided to have a photo put on canvas as we had for her predecessor Barney. We now have three pictures of our fur babies on the wall as we found a snapshot of Kizzy, my GSD when Hubby and I first met so had hers done too. On February 24th 2022 we were blessed to find Maya, a 13 week old GSD pup who has made her own place in our hearts. You can follow our training methods, photos and her growth in my blog posts. From 2014 to 2017 'Home' was a 41 foot narrow boat where we made strong friendships both on and off the water. We were close to nature enjoying swan and duck families for neighbours, and it was a fascinating chapter in our lives. We now reside in a small bungalow on the Lincolnshire coast where we have forged new friendships and interests.
View all posts by pensitivity101 →
This entry was posted in #flash fiction, blogging, Challenge and tagged fiction, Mindlovemisery’s Menagerie, Tale Weaver. Bookmark the permalink.