Shopping on a budget

Hubby picked up on a headline today about a savvy mum spending £10 on food for the week in comparison to the government’s ‘£30 food parcel’ which probably only cost just over a fiver.
I couldn’t find that one, but did find this (source), and well, you know me, always on the lookout for saving a few pennies.
In this article not only does she price her shopping list, but also provides menus for the week for her and her family. Not all my cup of tea though.

Naturally, I had to do a comparison, though there are a few things I don’t buy and of course there are only two of us. 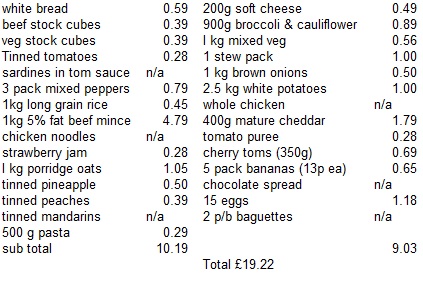 I have to take my hat off to her, as for a week, this is quite impressive in my opinion.
What she says about shopping around is true, if you have the time or the means, though frequenting the same shops regularly, you can get a ‘feel’ for when the bargains are due in store!
For us, a 400g loaf of bread lasts more than a week, as do the 12 packs of stocks cubes,
I buy 4 tins of tomatoes, chopped or peeled, a month, and neither of us like sardines.
The peppers I prepare and freeze, so they last over a month, rice we get at least 10 meals out of a pack, and I pay extra for lean minced beef, dividing the pack into five portions and freezing it, so that’s a month. Jam will definitely last more than a month (if I buy it), but then we don’t have that (or tinned fruit or chocolate spread) in our porridge, a box of which will also last us a month. Pasta is on a par, and I’m the only one who eats it, so a pack will give me at least five meals.
The soft cheese I’d buy for my cheesecakes, so not very often now, and the frozen veg will last well over a month. We get three days out of a stew pack with added onions and potatoes, though I buy a pack of 4 baking potatoes for 39p. I buy chicken breast rather than a whole bird and get four large breasts (again a month’s supply) for around £3.50.
My extra mature cheddar is the same and lasts a month, tomato puree I don’t buy any more because it’s too acidic for Hubby’s digestion, and I’m the only one who eats cherry tomatoes, so again that will last me quite a while. Bananas are good at 13p each, but we buy a 5 or 7 pack for the week as we do have them on cereal or for a dessert with yogurt.
Our eggs tend to go past their best before date before we use them, especially when Maggie went off them for breakfast, and if I buy a baguette, it’s fresh and costs 22p.

I see there is no milk, butter/margarine, yogurt, tea, coffee, baked beans or biscuits on her list, nor fizzy drinks, chocolate bars or crisps which kids tend to enjoy. There is also no mention of desserts in her menus, neither is there fresh fruit other than bananas.

This is my monthly shopping list, though obviously some items would be top ups weekly too, and stock cubes I tend to buy 4 or 5 packs at a time at 39p when I’m running low.

Our meal today is cottage pie with one pack of mince, an onion, garlic, mashed potato with cheese topping and will be served with broccoli, sprouts and carrots, so a cost of around £2.00 for the two of us.

It would appear that The Sun did a similar interview with another Mum of two in January 2020 (source), which was also picked up by The Mirror (source).
She gives recipes and menus too.

Post Script:
Readers may have noticed the absence of some basics on my shopping list such as flour, sugar, tinned stuffs, soups, instant mash (yeah, I use it a lot, but don’t knock it, at 28p a pack serves 4 or does the topping for 2 cottage pies for Hubby and I), instant custard, sultanas, etc. These are purchased when I need them, so not every month.

I am a retired number cruncher with a vivid imagination and wacky sense of humour which extends to short stories and poetry. I love to cook and am a bit of a dog whisperer as I get on better with them than people sometimes! We have recently lost our beloved dog Maggie who adopted us as a 7 week old pup in March 2005. We decided to have a photo put on canvas as we had for her predecessor Barney, and now have three pictures of our fur babies on the wall as we found a snapshot of my GSD so had hers done too. From 2014 to 2017 'Home' was a 41 foot narrow boat where we made strong friendships both on and off the water. We were close to nature enjoying swan and duck families for neighbours, and it was a fascinating chapter in our lives. We now reside in a small bungalow on the Lincolnshire coast where we have forged new friendships and interests.
View all posts by pensitivity101 →
This entry was posted in budgets, diary, food, Frugality, Just a thought, money matters, My life, numbers, observations, Opinions, shopping and tagged budgets, family meals, food, money matters, shopping. Bookmark the permalink.

13 Responses to Shopping on a budget