That glow is no star

We have had another wonderful Christmas Day, and still have lots of parcels to open tomorrow. We try to extend our celebration over at least two days, one of our little personal traditions.

As expected, we’ve eaten too much, but did show willing and go for a second walk this evening. Dinner was a mega affair, though I was careful not to overload Hubby’s plate, and
he had a little of a lot of different things. I decided against putting gammon on the plate as there was just so much else!!!
This was my dinner with loads of veg (taken with flash and without) 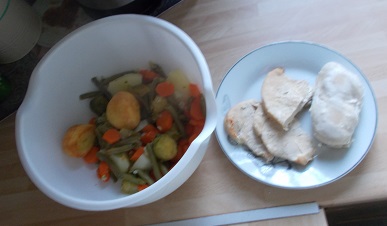 With the gammon I have in the fridge and all the other bits and pieces, we shall be OK for the next two days as all I have to do is make mash potato to go with the veg and fry it up. Pictures of our bubble and squeak tomorrow folks!

I’ve already mentioned my reaction to Hubby’s slivovitz, and it took a while for my lips to feel like they belonged to me again and for the weird sensation in my mouth to diminish.
Like the new SWMBO?

I had been looking forward to my glass of white sparkling wine with my dinner, and that had been in the fridge since yesterday. 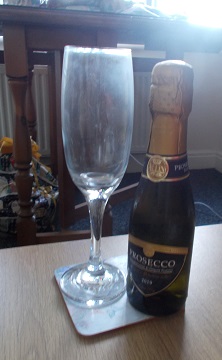 As I munched and sipped, the memories came flooding back, the inner glow started, and I was soon very warm of face and red of cheeks.
I don’t drink because I can’t handle it, and when we were in Amsterdam in 1991 I fell off my bar stool after just two glasses (not even a half pint) of Dutch beer.
In years gone by, this happy glow would lead to me closing my eyes and nodding off for at least an hour. 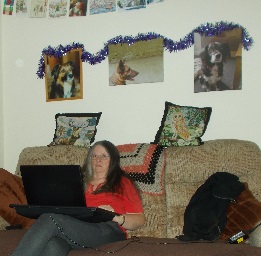 This was me working on my laptop yesterday evening after speaking with my brother and the family in NZ. Don’t Barney, Kizzy and Maggie look festive!

This was me today after lunch with the new bear. Yes, those cheeks are very pink and shiny. Hubby said he could feel the heat from the other side of the room.

Our neighbour came in for an hour this afternoon which was really nice. She loved her box of handmade cards, and gave us a hamper with loads of goodies in it, including a musical house containing shortbread. It had a clockwork winder and plays Deck the Halls. Fabulous!! Hubby has bought me the latest David Baldacci book. I read a lot of his stuff years ago and intend to read more next year. He also bought me a battery operated can opener as I’ve been struggling with our usual one because of my hands, a Suduku book (I also got him one, but they are not the same!!) and the above bear.

We watched a couple of films on Youtube, one of which was very 70s and naff. It was hysterical to watch people ‘dying’ before they’d got shot, or falling down before the bombs went off. It wasn’t a timing delay on the film either! Oh those were the days!!

Our candles have been burning all day so our departed loved ones have not been forgotten. Time for bed now. Tomorrow will see our second day of festivities and overindulgence.
Love Christmas!!

I am a retired number cruncher with a vivid imagination and wacky sense of humour which extends to short stories and poetry. I love to cook and am a bit of a dog whisperer as I get on better with them than people sometimes! In November 2020, we lost our beloved Maggie who adopted us as a 7 week old pup in March 2005. We decided to have a photo put on canvas as we had for her predecessor Barney. We now have three pictures of our fur babies on the wall as we found a snapshot of Kizzy, my GSD when Hubby and I first met so had hers done too. On February 24th 2022 we were blessed to find Maya, a 13 week old GSD pup who has made her own place in our hearts. You can follow our training methods, photos and her growth in my blog posts. From 2014 to 2017 'Home' was a 41 foot narrow boat where we made strong friendships both on and off the water. We were close to nature enjoying swan and duck families for neighbours, and it was a fascinating chapter in our lives. We now reside in a small bungalow on the Lincolnshire coast where we have forged new friendships and interests.
View all posts by pensitivity101 →
This entry was posted in current events, diary, My life and tagged current events, day to day, diary, My life, our Christmas. Bookmark the permalink.

15 Responses to That glow is no star