It was a wet and windy night. Temperatures had dropped and you could hear the ice hitting the window panes.
Toasty and warm inside, she sat in comfortable silence tapping away on her computer.
It wasn’t often she had nights to herself. Outside interests had petered out thanks to the social distancing rules and closure of so many entertainment venues. There was nothing worth watching on TV and things like reading or embroidery had long since passed their sell by date of interest.
She’d had a half hour session on the piano, made herself two cups of tea either side of a light supper, and was now unwinding after a frustrating day.
People were becoming tiresome and annoying. Appointments were made, then rescheduled, yet no-one seemed committed to honouring promises. It never used to be like that. In days not that long ago, people were dependable. If they said they were going to do something, they did, sometimes going the extra mile to do a good job. Word of mouth was the best recommendation ever, and a good reference worth its weight in gold. It went the other way too. If you received bad service, you never went back, neither did you pass the company name on. A lot of people had let them down, but the troops had rallied and worked together so that no-one would be disappointed. Everyone was on hard times, and it was a case of making the most of what you had and what you could afford.

Time was pushing on. She had things to do and prepare before he got back.
It was the longest night, and it always amazed her how he never crashed under the influence of the sherries and mince pies left out for him on his rounds. Of course the reindeer knew the route and the way home enough to keep him out of trouble. Still, it was up to her to make sure there was a hot meal waiting for him, that his slippers were laid out by the fire and a warm cosy bed ready to welcome him into slumber. The reindeer would also be tired but ready to munch on fresh hay and plenty of water before retiring to their own cots for a well earned rest.
Mary Kringle smiled and the dimples in her rosy cheeks deepened. She loved this time of year. 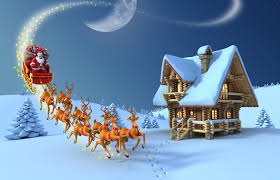 I am a retired number cruncher with a vivid imagination and wacky sense of humour which extends to short stories and poetry. I love to cook and am a bit of a dog whisperer as I get on better with them than people sometimes! In November 2020, we lost our beloved Maggie who adopted us as a 7 week old pup in March 2005. We decided to have a photo put on canvas as we had for her predecessor Barney. We now have three pictures of our fur babies on the wall as we found a snapshot of Kizzy, my GSD when Hubby and I first met so had hers done too. On February 24th 2022 we were blessed to find Maya, a 13 week old GSD pup who has made her own place in our hearts. You can follow our training methods, photos and her growth in my blog posts. From 2014 to 2017 'Home' was a 41 foot narrow boat where we made strong friendships both on and off the water. We were close to nature enjoying swan and duck families for neighbours, and it was a fascinating chapter in our lives. We now reside in a small bungalow on the Lincolnshire coast where we have forged new friendships and interests.
View all posts by pensitivity101 →
This entry was posted in #flash fiction, blogging, Challenge, Take Seven and tagged blogging, fiction, Take Seven, word challenge. Bookmark the permalink.