Hello and a very good morning to you all.
The sun is shining, it’s a beautiful day and we shall be going for our first walk shortly.
Hubby had a bad night so hasn’t gone out with his friend this morning as he’s exhausted, so we shall be having a quiet day of plodding and not much else.
Breakfast was boring porridge with apricots, and I also had a piece of toast. Hubby had the same, but yogurt as well, so we’ve started off the day with something warming.
Lunch is going to be a jacket (baked) potato with turkey, cheese and mixed veg.

When we get back from our walk, I shall settle down to make my cards. I need about a dozen, but chances are I’ll end up making a few more, though it depends on how fiddly my ideas are and how long it takes to make each one. Sometimes it’s just a simple case of pretty paper for a background and a topper of some description, but then I like to add ‘frillies’ to give them an edge, and that’s what can take the time. I’m no production line like I was in 2015 when we house sat for MSM for 6 weeks over Christmas. I took full advantage of all that lovely space to work in and not having to put everything away in order to move as we did on the boat! 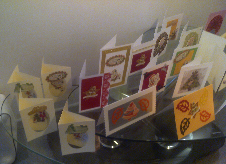 This was the selection I made at the time in one session. The photos suggest more than there are as my pictures are taken from different angles, but I made over 20 that day.
It was weird having all that space, especially as if you took the bow and helm off our boat, we could have put it in her kitchen and walked all the way round it!

Have a good day everyone.
Keep safe.

I am a retired number cruncher with a vivid imagination and wacky sense of humour which extends to short stories and poetry. I love to cook and am a bit of a dog whisperer as I get on better with them than people sometimes! We have recently lost our beloved dog Maggie who adopted us as a 7 week old pup in March 2005. We decided to have a photo put on canvas as we had for her predecessor Barney, and now have three pictures of our fur babies on the wall as we found a snapshot of my GSD so had hers done too. From 2014 to 2017 'Home' was a 41 foot narrow boat where we made strong friendships both on and off the water. We were close to nature enjoying swan and duck families for neighbours, and it was a fascinating chapter in our lives. We now reside in a small bungalow on the Lincolnshire coast where we have forged new friendships and interests.
View all posts by pensitivity101 →
This entry was posted in current events, diary and tagged day to day, general chit chat. Bookmark the permalink.