I’ve had some fun today, and spent about four hours with papers, scalpel, sticky tape and gem stones putting a few cards together. One took me over an hour and a second almost an hour as I nearly cocked it up completely due to a momentary lapse in concentration.

I’m quite pleased with this one as, although in a kit, I haven’t actually done one like it before. I’ve had similar sets, but have usually opted for the simplistic version, so this was a bit of a challenge and I almost came unstuck.

I had another go with the lattice template, this time forming a cross on the front of the card. Cutting out the diamonds took me an age, thus over an hour to make. 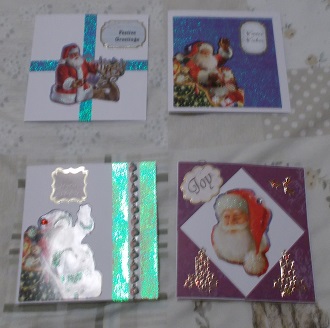 In comparison, these were quite straightforward, the fiddliest bits being the trimmings on the two cards on the left. Sorry about the flash on the bottom one.

But this one is for you, my readers. The greeting on the front reads
‘Wishing you Joy and Prosperity’. 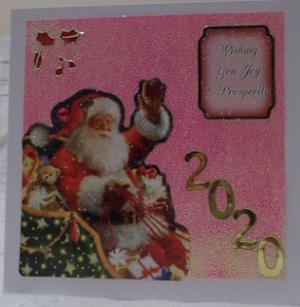 I am a retired number cruncher with a vivid imagination and wacky sense of humour which extends to short stories and poetry. I love to cook and am a bit of a dog whisperer as I get on better with them than people sometimes! We have recently lost our beloved dog Maggie who adopted us as a 7 week old pup in March 2005. We decided to have a photo put on canvas as we had for her predecessor Barney, and now have three pictures of our fur babies on the wall as we found a snapshot of my GSD so had hers done too. From 2014 to 2017 'Home' was a 41 foot narrow boat where we made strong friendships both on and off the water. We were close to nature enjoying swan and duck families for neighbours, and it was a fascinating chapter in our lives. We now reside in a small bungalow on the Lincolnshire coast where we have forged new friendships and interests.
View all posts by pensitivity101 →
This entry was posted in card making, current events, hobbies and interests and tagged card making, Christmas cards. Bookmark the permalink.