The Day that got Away

Well, I didn’t make my cards, but we did get in two walks today and have now settled in for the night. We had two games of dart, winning one each, Hubby getting 171 with 3 in the treble 19!! Closest I got to that was ages ago with three in the treble 18. 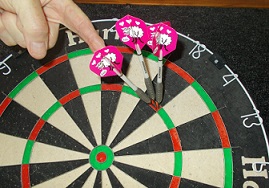 I’ve only scored the maximum 180 once, but there was no-one about to see it.

Our first walk was down to the clubhouse, back along the windy path that ran parallel but above the road, then down by the flats and up on the other prom. We could see heavy rain and black clouds out to sea, and guessed we had about half an hour before it hit.
We bumped into one of the girls from the darts team, her husband, father and three dogs. I had fuss from all three. They are looking good, and it was so nice to see them. They were sorry to hear about Maggie.

When we parted company, there seemed to be dogs everywhere, several of which we didn’t know, so we walked down to the park towards home as the black cloud was gaining on us.
By the time we got to the corner of our road, it was starting to rain. Our neighbour was checking her post, so we invited her in for a cuppa. At 1pm, we asked if she’d like to join us for lunch, and she accepted! I did turkey slices, stuffing, tatty cakes and mixed veg, followed by a third cup of tea and mince pies.  She was here for over three hours, which made a nice change for all of us. She’s doing OK. Next week will see her late husband’s birthday, so we know that will be a difficult time for her.

We had our second walk about an hour ago, only round the block, but it wasn’t raining and surprisingly mild as there was cloud cover and no wind.

Hubby is going out tomorrow, so I shall get on with my cards then. I’m getting dangerous as I have some more ideas going round in my head!! I have a dozen or so more to make and they will all differ in some way. Although I might use the same theme for one or two, the papers and colours will be different. I try to make them all individual anyway. 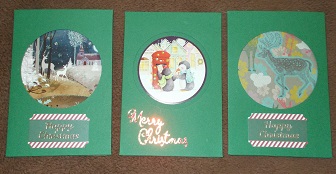 I made these last year.

It’s actually been a pretty good day, even though we don’t appear to have done very much or gone anywhere!

I am a retired number cruncher with a vivid imagination and wacky sense of humour which extends to short stories and poetry. I love to cook and am a bit of a dog whisperer as I get on better with them than people sometimes! We have recently lost our beloved dog Maggie who adopted us as a 7 week old pup in March 2005. We decided to have a photo put on canvas as we had for her predecessor Barney, and now have three pictures of our fur babies on the wall as we found a snapshot of my GSD so had hers done too. From 2014 to 2017 'Home' was a 41 foot narrow boat where we made strong friendships both on and off the water. We were close to nature enjoying swan and duck families for neighbours, and it was a fascinating chapter in our lives. We now reside in a small bungalow on the Lincolnshire coast where we have forged new friendships and interests.
View all posts by pensitivity101 →
This entry was posted in current events, diary and tagged chit chat, day to day. Bookmark the permalink.

13 Responses to The Day that got Away