Memories of Christmas Past

The jingly music is already in the shops and although we have no TV, the news channels Hubby tunes into are running the Christmas ads. So much is ‘in yer face’ it makes some of us wish for hibernation.
Don’t get me wrong, we enjoy Christmas, but what annoys us more than anything is the commericalism and profiteering.

Last year I had a problem finding turkey steaks for our Christmas dinner. Now that there is no family to feed or expected visitors, cooking a whole bird just isn’t practical for the two of us. When I did eventually find a tray of three, the price was ridiculous, so we had chicken. It looks like the same thing is going to happen now as tens of thousands of turkeys are to be culled due to an outbreak of bird flu. If I remember correctly, that was the excuse for shortages last year.

Before Hubby and I got together, I would be preparing for Christmas in the way of gifts from August. Money was tight so I spread the cost as best I could, but still managed to overspend.
The company I worked for gave everyone a turkey so that saved a few pounds, and Christmas Eve would see me preparing veg for a meal for at least a dozen on Christmas Day. There was our family of four, foster kid and boyfriend, the Ex-wife and fiance, partner’s mother and her husband, plus HER sister and husband at HER invitation to our house. No help offered for washing up either, but it was fun to watch excited and impatient hands ripping paper and screams of delight when Santa had brought what they wanted, except one year when £300 of stocking fillers plus gifts were carelessly tossed on the pile with the comment ‘where are we going to put all this junk?’
Out of the mouths of babes, except this was no babe, but the thorn in my side of a blue-eyed ‘angel’ used to getting his own way and always playing his divorced parents one off against the other.
To add insult to injury, I’d spent a week’s wages on a gold chain for my partner as he did not want one with a St Christopher or Crucifix on it, and not only didn’t see him open it, but received no recognition or thanks. When asked if he liked it, he said it was OK, and I could buy the cross to go on it for his birthday. He didn’t get it.

You may ask why I was still there, as the original plan was to leave in December 1988. It was nothing to do with Christmas, but loyalty, however misplaced, to a guy who had been accused of something he hadn’t done, and I felt I had to clear his name first. No-one had any idea of what was to follow in a few months, and although I’m not exactly pleased with myself for the way I left, I have never regretted my decision.

Hubby and I have always had terrific Christmases, from our penniless first to the present day. We put the dekkies up and a tree, and have a traditional Christmas dinner. It’s going to be a little different this year, but we shall still have a lovely day, just the two of us. 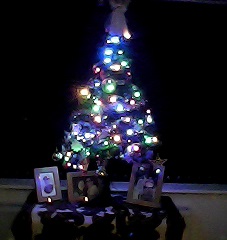 I am a retired number cruncher with a vivid imagination and wacky sense of humour which extends to short stories and poetry. I love to cook and am a bit of a dog whisperer as I get on better with them than people sometimes! In November 2020, we lost our beloved Maggie who adopted us as a 7 week old pup in March 2005. We decided to have a photo put on canvas as we had for her predecessor Barney. We now have three pictures of our fur babies on the wall as we found a snapshot of Kizzy, my GSD when Hubby and I first met so had hers done too. On February 24th 2022 we were blessed to find Maya, a 13 week old GSD pup who has made her own place in our hearts. You can follow our training methods, photos and her growth in my blog posts. From 2014 to 2017 'Home' was a 41 foot narrow boat where we made strong friendships both on and off the water. We were close to nature enjoying swan and duck families for neighbours, and it was a fascinating chapter in our lives. We now reside in a small bungalow on the Lincolnshire coast where we have forged new friendships and interests.
View all posts by pensitivity101 →
This entry was posted in diary, Memories, Relationships and tagged Christmas preparations, diary, memories. Bookmark the permalink.

14 Responses to Memories of Christmas Past