Every Monday, Fandango provides a photo to inspire us.
This week he’s chosen one from StreetRealityPhotogr at DeviantArt. 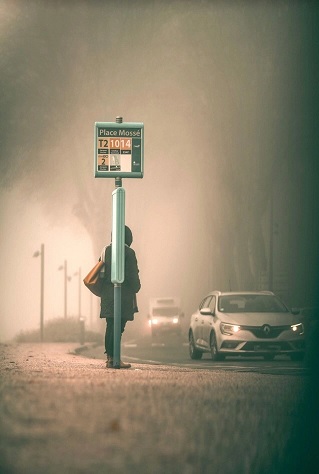 Terri looked at her watch. He was late.
For the past few months she had been engaged in conversation with Eric in an on-line chat room. Recently he had sent a photograph of himself and when she returned one of her, he had gushed over how lovely she was and how much he’d like to meet her.
She pondered over his request and finally agreed.
Now here she was, cold and damp, waiting for a guy who was probably going to be a no show.
A horn sounded and a white renault pulled up in front of her.
‘Are you Terri?’ asked the grubby driver, a man in his fifties smoking a cigarette.
‘Who are you? ‘ she replied.
‘I’m Eric. Get in.’
‘Er, I don’t think so,’ she said and turned away.
The man got out and roughly grabbed her by the arm.
‘You’re coming with me!’ he hissed.
The van pulled across the car blocking its exit and police officers poured out, dragging ‘Eric’ off her.
Terri lit a cigarette a few feet away, feeling every day of her 10 years on the force.
Hopefully they had caught another on-line trickster preying on lonely young girls.

I am a retired number cruncher with a vivid imagination and wacky sense of humour which extends to short stories and poetry. I love to cook and am a bit of a dog whisperer as I get on better with them than people sometimes! We have recently lost our beloved dog Maggie who adopted us as a 7 week old pup in March 2005. We decided to have a photo put on canvas as we had for her predecessor Barney, and now have three pictures of our fur babies on the wall as we found a snapshot of my GSD so had hers done too. From 2014 to 2017 'Home' was a 41 foot narrow boat where we made strong friendships both on and off the water. We were close to nature enjoying swan and duck families for neighbours, and it was a fascinating chapter in our lives. We now reside in a small bungalow on the Lincolnshire coast where we have forged new friendships and interests.
View all posts by pensitivity101 →
This entry was posted in blogging, Challenge, fiction, photoprompt and tagged #FFFC, fandango's flash fiction challenge. Bookmark the permalink.