Nekneeraj  is our host, so click here and find out more about the Tuesday Photo Challenge.
Picture from pinterest 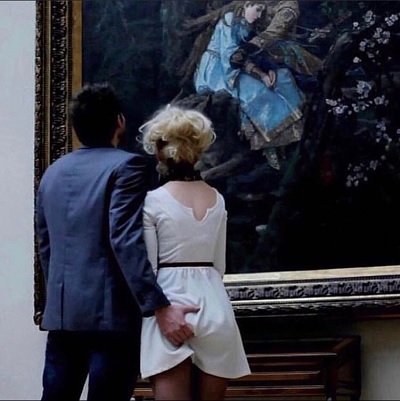 They were enjoying a pleasant afternoon at the art gallery, then he had to go and spoil it.
She didn’t mind his arm draped across her shoulders, neither did she object when the same arm moved to her waist, but when it travelled even more South, she was fuming.
Rather than make a scene, she snaked her own hand below his waist and he smiled cockily.
Grabbing a handful of more than cloth and squeezing hard, she said sweetly
‘I suggest you remove your hand and leave quietly, else I will have you screaming here in front of everyone.’

I am a retired number cruncher with a vivid imagination and wacky sense of humour which extends to short stories and poetry. I love to cook and am a bit of a dog whisperer as I get on better with them than people sometimes! We have recently lost our beloved dog Maggie who adopted us as a 7 week old pup in March 2005. We decided to have a photo put on canvas as we had for her predecessor Barney, and now have three pictures of our fur babies on the wall as we found a snapshot of my GSD so had hers done too. From 2014 to 2017 'Home' was a 41 foot narrow boat where we made strong friendships both on and off the water. We were close to nature enjoying swan and duck families for neighbours, and it was a fascinating chapter in our lives. We now reside in a small bungalow on the Lincolnshire coast where we have forged new friendships and interests.
View all posts by pensitivity101 →
This entry was posted in #flash fiction, blogging, Challenge, photoprompt and tagged Mindlovemisery’s Menagerie, photo challenge. Bookmark the permalink.