The image below is from niklin1 at DeviantArt and has been chosen by Fandango for his 88th Flash Fiction challenge.
For the visually challenged writer, the photo is of an old man sitting in a subway car holding a large cardboard box on his lap. 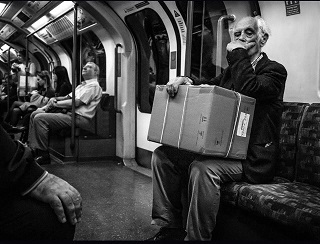 Albert was relieved to have found a seat in the last carriage of the train.
He was even more pleased he didn’t have to share it with anyone.
Resting the box with its precious cargo on his knee, he took note of his fellow passengers.
None were taking an interest in him at all, which was an even bigger bonus.
Looking around, he thought about what their lives held, and what kind of work they did. The two women probably worked in the same office, and the guy by the door looked like a tourist as he was in shirtsleeves and cotton pants. The heavy set man opposite with the pudgy hands and gold pin in his striped tie looked like a banker.
Albert looked like a butler and could well have played the part in any of the Batman movies, but nothing could be further from the truth.
He was a hitman for hire, and the box contained the head of his current employer’s enemy.

I am a retired number cruncher with a vivid imagination and wacky sense of humour which extends to short stories and poetry. I love to cook and am a bit of a dog whisperer as I get on better with them than people sometimes! We have an elderly dog called Maggie who adopted us as a 7 week old pup in March 2005. From 2014 to 2017 'Home' was a 41 foot narrow boat where we made strong friendships both on and off the water. We were close to nature enjoying swan and duck families for neighbours, and it was a fascinating chapter in our lives. We now reside in a small bungalow on the Lincolnshire coast where we have forged new friendships and interests.
View all posts by pensitivity101 →
This entry was posted in #flash fiction, blogging, Challenge, photoprompt and tagged #FFFC, fandango's flash fiction challenge, photoprompt. Bookmark the permalink.

17 Responses to The Last Tube