I was reading this post and it brought back memories of the cottage and the bungalow in Poole.
When Maggie was a pup, she slept in a cage at night, though the cage was in our bedroom so she knew where we were, and if necessary one of us could get up and let her out in the early hours to do her business.
The cage was never treated as punishment, and was always open during the day though if we had to go out and couldn’t take her, then she was secured in it until we got back. It was her safe place, and if she ever felt insecure, she would retreat to it, snuggle up in her bed (aka Hubby’s old jumper) and go to sleep.

When the cage was dismantled, she had her own bed, but we (Hubby) allowed her up on the bed once, and that was it. It was hers, and we could share it.
Ani and Echo curled up behind Sue’s knees, and in so doing, Sue sleeps better.
It worked for me too. Maggie would curl up behind mine, and I would sleep soundly.
It was the same in the cottage, though we changed sleeping sides following an article about moodiness which confused her a little as suddenly I was facing the other way. It threw me too, but eventually things got back into the comfort routine and a good night’s rest was had by all.

In 2010 I visited Bro in NZ for two months. No Maggie to snuggle into my knees, and a double bed all to myself, but I slept very well after a couple of nights.
Apparently she slept on my side at home while I was away.

On the boat, she would curl up in the corner at the bottom of the bunk against the hull and small cupboard. When it was really cold, she’d wriggle up between me and Mum’s tapestries against the hull though she never tried to get in bed with me. On those mornings I would have a dog snuggled into my armpit snoring contentedly. 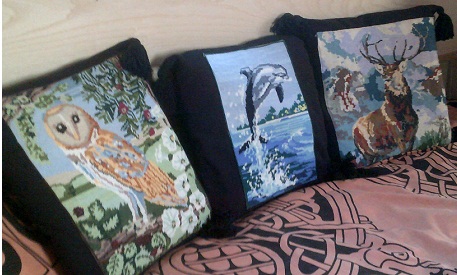 These days, Maggie still sleeps with me and curls up alongside me rather than behind my knees as I tend to sleep on my back rather than my side since my surgery.  When I finally settle down for the night and turn out the light, I am touching her somewhere, whether it’s a hand on her flank or my arm around her, so if she moves or wants to go out, I know about it. In the night, she’ll turn round, or stretch herself full length against my side, but I soon go back to sleep, as does she.

Dogs (and other pets) pick up on our moods and emotions. They offer comfort and unconditional love when we are feeling at our lowest or most insecure. They just seem to know when we need that extra bit of TLC, and there are times when we are most grateful for it.

I am a retired number cruncher with a vivid imagination and wacky sense of humour which extends to short stories and poetry. I love to cook and am a bit of a dog whisperer as I get on better with them than people sometimes! We have an elderly dog called Maggie who adopted us as a 7 week old pup in March 2005. From 2014 to 2017 'Home' was a 41 foot narrow boat where we made strong friendships both on and off the water. We were close to nature enjoying swan and duck families for neighbours, and it was a fascinating chapter in our lives. We now reside in a small bungalow on the Lincolnshire coast where we have forged new friendships and interests.
View all posts by pensitivity101 →
This entry was posted in Dogs, Just a thought, Personal Thoughts and tagged dogs, love and support. Bookmark the permalink.

12 Responses to Memories of snuggles