A bit of self indulgence…………

There are times when I could (and do) swear and curse when things go wrong. Times when I want to throw my toys out of the pram, even throw myself on the floor and have a proper tantrum, or burst into tears at the unfairness of it all.

I have always found writing down my anxieties, worries, concerns, jumbled thoughts or frustrations to be very therapeutic. It beats reaching for the biscuit tin, chocolate or sweets of the past, though some have managed to find their way as a nibblethon should I have any in the house to start with.

From my recent posts, readers will be aware that Hubby has had surgery (at last, after waiting almost three years) and we can finally move forward. I am still waiting for an appointment for my mammogram and will be following that up as soon as Hubby is on solids if I haven’t heard anything beforehand. Things have been getting on top of me but I have been trying to hold it all together.

Today has been a bit of a shit day as you can tell by my ‘Today is….’ post. I’m worried about the lack of aftercare for Hubby but if necessary, I will load us all in the car and get him to an A&E as our 111 or 999 service is stretched beyond acceptable emergency limits.
The dog has been a pain and winding me up, which is winding her up even more because she is picking up on my anxiety. I have been up and down all day opening the door for her to go out…… mostly not……. only for her to stand there in the pouring rain and stare at me.
I finally slammed the door on her and the magnetic torch fell off scattering the batteries everywhere. It still works and is back in place, but it didn’t make me feel better.

The bad weather has not helped my mood either, and it hasn’t let up all day, until now.
I have walked Maggie three times, the first getting soaked in desperation after coming back from the surgery for Hubby’s INR as it was obvious she wanted to go, but would NOT oblige us in the garden.  So for the sake of getting wet, we had success in both quarters.
Later I donned full yellow condom gear and walked her, again having success in both businesses. The rain finally eased about an hour ago, so I walked her again and it was another double whammy. She is fed, watered, wee’d and poo’d and I just wish she would settle. It’s not her fault that I’m tired and crabby which is compounding her restlessness.

There has been some good news in that we now have a sufficient supply of liquid food for Hubby for our 14 day self isolation period. I can have practically anything as I’m ignoring the diet for now and making do with what’s in the house.
I have become partial to bacon and mushroom baguettes/butties/rolls, and having purchased 4 brown baps for the deed, was looking forward to my lunch today.
I got Hubby sorted first, then the dog so that I could give her her meds half an hour later, then set to for my own. It was the icing on the cake………. I burnt the bacon, nearly setting fire to it, so had to open the window and close the kitchen door so as not to set the smoke alarm off which, by the way, works perfectly every time I cook toast.
It was the last straw and I could’ve cried. Shut in the kitchen with my smoked bacon in every sense of the word and an oblivious Hubby asleep on the couch bless him, I just stood there. Then thought sod it. Crying wasn’t going to resolve anything, and I prefer my bacon crispy anyway, so I slapped it all in the roll regardless. Actually, it was OK.

Tomorrow is another day, and the weekend should be nice and quiet, dog and weather permitting. I’ll have to take her out for her final wee in an hour. She’d better go as she didn’t last night and I was tossing and turning most of the night in case she wanted to go out, or worse had an accident indoors. 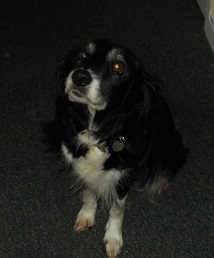 I am a retired number cruncher with a vivid imagination and wacky sense of humour which extends to short stories and poetry. I love to cook and am a bit of a dog whisperer as I get on better with them than people sometimes! We have an elderly dog called Maggie who adopted us as a 7 week old pup in March 2005. From 2014 to 2017 'Home' was a 41 foot narrow boat where we made strong friendships both on and off the water. We were close to nature enjoying swan and duck families for neighbours, and it was a fascinating chapter in our lives. We now reside in a small bungalow on the Lincolnshire coast where we have forged new friendships and interests.
View all posts by pensitivity101 →
This entry was posted in current events, diary, health, miscellaneous, oh dear, Personal Thoughts and tagged day to day, frustrations. Bookmark the permalink.

32 Responses to A bit of self indulgence…………