Cheeky picture from Michael for his Tale Weaver Prompt this week! 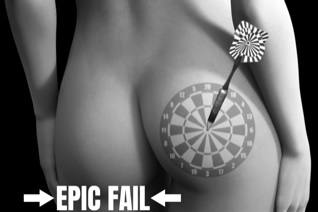 This week consider the notion of an epic fail.

It can be a very subjective view, like a dinner that went wrong, a holiday that went pear shaped, anything that started off with the best of intentions and through various means failed to meet expectations.

Go where the prompt leads you and have fun.

She’d never entertained before, never actually cooked for herself, let alone anyone else, and now she was cooking a meal for four.
It was a foolproof recipe for lasagna, she had red wine on the mantle to be served at room temperature with the meal, but there was plenty of beer in the fridge for the guys.
The salad was tossed and chilling, the table laid, and the pasta boiling dry when the doorbell rang. She hadn’t even begun to make the rest and went into meltdown as her good intentions were ruined with the pasta.

Her guests found her in tears and the boyfriend in hysterics supping a beer in front of the TV. He got up to offer his mate one whilst his partner tried to console the chef.
Ten minutes later laughter was heard coming from the kitchen and the guys peeked round the door to see the hostess sitting on a chair with a glass of wine in her hand whilst their guest had donned an apron and was stirring pans happily at the cooker.
‘Get out!’ they hissed, then laughed again.

Dinner was a belated success as the pasta didn’t need to be cooked first, so the sauce and meat mixes were layered over it, then the dish put in the oven for half an hour. The red wine had gone for a bucket of chalk, and not a drop of it had found its way into the meal! 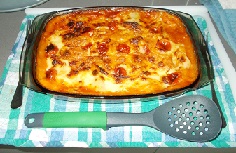 Not the lasagna in question, but mine from June 2017.

I am a retired number cruncher with a vivid imagination and wacky sense of humour which extends to short stories and poetry. I love to cook and am a bit of a dog whisperer as I get on better with them than people sometimes! We have an elderly dog called Maggie who adopted us as a 7 week old pup in March 2005. From 2014 to 2017 'Home' was a 41 foot narrow boat where we made strong friendships both on and off the water. We were close to nature enjoying swan and duck families for neighbours, and it was a fascinating chapter in our lives. We now reside in a small bungalow on the Lincolnshire coast where we have forged new friendships and interests.
View all posts by pensitivity101 →
This entry was posted in blogging, Challenge, food and tagged Mindlovemisery’s Menagerie, Tale Weaver. Bookmark the permalink.