Nekneeraj is our host for the Tuesday Photo Challenge. You can find out more here
Photo by cottonbro on Pexels.com 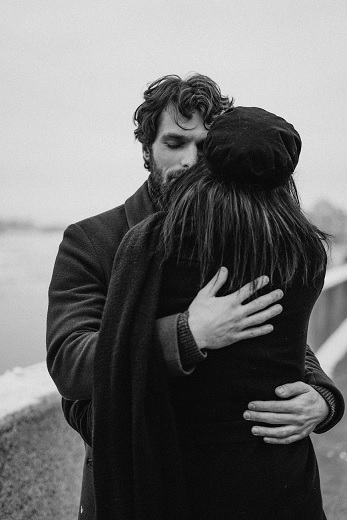 He could smell the wool of her beret, taste the salt in her hair from the sea breeze.
Her coat swamped her as he felt the shape of her body when they embraced. She felt so lost and fragile in his arms,
He closed his eyes and held her close. She held on to him as if she’d never let him go, but he knew the time had come to say farewell.
How he wished time would stand still and they could stay like this forever, but it could never be.
She had taught him so much in the year they had together, but where he went she could not follow. To do so would kill her, and he could not allow it.
When he kissed her for the final time, all memory of the past twelve months would be erased and she would continue with her life as if he had never existed for her.
It was the way of his people, the legacy of an alien race sent to earth to learn about Mankind. They mingle amongst us but we are none the wiser of their passing. At most, an elusive dream fragment that fades as the morning dawns or a sense of deja vu.

I am a retired number cruncher with a vivid imagination and wacky sense of humour which extends to short stories and poetry. I love to cook and am a bit of a dog whisperer as I get on better with them than people sometimes! In November 2020, we lost our beloved Maggie who adopted us as a 7 week old pup in March 2005. We decided to have a photo put on canvas as we had for her predecessor Barney. We now have three pictures of our fur babies on the wall as we found a snapshot of Kizzy, my GSD when Hubby and I first met so had hers done too. On February 24th 2022 we were blessed to find Maya, a 13 week old GSD pup who has made her own place in our hearts. You can follow our training methods, photos and her growth in my blog posts. From 2014 to 2017 'Home' was a 41 foot narrow boat where we made strong friendships both on and off the water. We were close to nature enjoying swan and duck families for neighbours, and it was a fascinating chapter in our lives. We now reside in a small bungalow on the Lincolnshire coast where we have forged new friendships and interests.
View all posts by pensitivity101 →
This entry was posted in #flash fiction, blogging, Challenge, photoprompt and tagged Mindlovemisery’s Menagerie, photo challenge. Bookmark the permalink.