Unlike Fibbing Friday, Truthful Tuesday is exactly what it says.

I don’t read as much as I used to, but when I did, I would read anything by Sandra Brown, Erica Spindler,  Erica James, Judith McNaught, Cathy Kelly, David Baldacci and Matthew Reilly, Lee Child having been kicked into touch after book 18, Never Go Back.

Matthew Reilly and David Baldacci could write at a fantastic pace, and you were right there alongside the main characters.
The first Sandra Brown book I read was Where There’s Smoke and the twist at the end was one of the best ever IMO. Although somewhat predictable with her short stories, her novels, such as Envy were good reads, and Breath of Scandal and The Silken Web would still make me cry after half a dozen readings.
Cathy Kelly and Erica James wrote about ‘real people’ and life, whereas Judith McNaught’s modern stories were pure escapism in respect of wealth. My favourite of hers was Remember When and I wore the gilt off the cover. 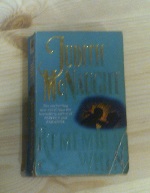 The first book I remember reading and enjoying was probably Five Children and It by E Nesbit (August 15, 1858 – May 4, 1924). I also read The Phoenix and The Carpet and The Railway Children. However, it was a fairytale that my dad bought for me that held my attention and I read it in one sitting. It was by Clifford Mills and called Where the Rainbow Ends. It’s a collector’s item now and I have no idea where my illustrated copy went.

As for my taste in literature? I am not a romantic as a rule, enjoy horror stories and read a lot of Stephen King, James Herbert and John Saul in my late teens and early 20s, but the only true classics I’ve read I suppose are Little Women, What Katy Did and What Katy Did Next, Heidi and Black Beauty.

I am a retired number cruncher with a vivid imagination and wacky sense of humour which extends to short stories and poetry. I love to cook and am a bit of a dog whisperer as I get on better with them than people sometimes! We have an elderly dog called Maggie who adopted us as a 7 week old pup in March 2005. From 2014 to 2017 'Home' was a 41 foot narrow boat where we made strong friendships both on and off the water. We were close to nature enjoying swan and duck families for neighbours, and it was a fascinating chapter in our lives. We now reside in a small bungalow on the Lincolnshire coast where we have forged new friendships and interests.
View all posts by pensitivity101 →
This entry was posted in blogging, Challenge, questions and answers and tagged Q&A, Truthful Tuesday. Bookmark the permalink.