Following on from last week’s theme of context, Michael has given us this to work with this week:

From the statement below choose the word from the three given to create a story within its context. Compose your response in prose or poetic form.

He noted the situation had become grim/concerning/chucklesome. 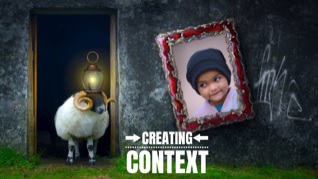 He noted the situation had become chucklesome, but the worst thing he could do was laugh.
Kids have a habit of doing that, they do something wrong, or something right with the wrong results and it’s funny…………… to adults. The trouble is, you have to tell them off keeping a straight face.
Swearing was usually the normal, and you can ignore the F word as a rule, but when it comes out of the mouth of a five year old, well that’s a different kettle of fish. It doesn’t help when they are brought up in a household where the F word is commonplace as it was next door.

Roddy was 9 and had just got his first bike.  He’d lovingly cleaned off the paintwork and was now working on the chrome trimmings. None of the plastic stuff, no-siree, he was polishing up the chrome to within an inch of its life, and the buffers he was using to do it were his Mum’s tampons.
She admitted that she had forgotten to put the box away as she’d been in a hurry, so it wasn’t as if Roddy had gone searching where he shouldn’t. Also she probably wouldn’t have minded one or two, but he’d used almost the entire box and the dirty ones were in a discarded pile in the middle of the floor when she came home……. with her boss directly behind her.

Being male, he took an interest in Roddy’s bike and asked him what he was using to polish up the metalwork. With great pride, Roddy held up a tampon and said they were terrific because they were individually wrapped so he always had a clean one. He could get in all the nooks and crannies with them and added that the cotton tail on the end was very handy for hanging it up until he wanted to use it.

Knowing and badly disguised adult smiles were shared as Roddy was encouraged to clean up his mess. His Mum didn’t know where to put herself and it was difficult to determine whether she was blushing with embarrassment or restrained humour at the situation.

I am a retired number cruncher with a vivid imagination and wacky sense of humour which extends to short stories and poetry. I love to cook and am a bit of a dog whisperer as I get on better with them than people sometimes! In November 2020, we lost our beloved Maggie who adopted us as a 7 week old pup in March 2005. We decided to have a photo put on canvas as we had for her predecessor Barney. We now have three pictures of our fur babies on the wall as we found a snapshot of Kizzy, my GSD when Hubby and I first met so had hers done too. On February 24th 2022 we were blessed to find Maya, a 13 week old GSD pup who has made her own place in our hearts. You can follow our training methods, photos and her growth in my blog posts. From 2014 to 2017 'Home' was a 41 foot narrow boat where we made strong friendships both on and off the water. We were close to nature enjoying swan and duck families for neighbours, and it was a fascinating chapter in our lives. We now reside in a small bungalow on the Lincolnshire coast where we have forged new friendships and interests.
View all posts by pensitivity101 →
This entry was posted in #flash fiction, blogging, Challenge, word prompt and tagged fiction, Mindlovemisery’s Menagerie, sunday writing prompt. Bookmark the permalink.