It arrived today and we watched it this evening.
What can I say? 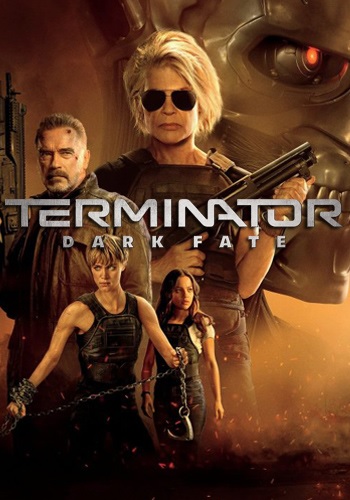 Forget any thought of another John Connor story. He is bumped off at the beginning by a T101 when he is a teenager (neat bit of editing from possible outage of T2) shortly after he and Sarah went off grid at the end of T2.
The first part of the film has sub-titles which I found a little distracting, but thankfully it doesn’t last too long, though IMO it could have been shorter.
The story itself isn’t that original, soldier and machine from the future, one to protect, one to kill, the savour of mankind.
You have naked people falling out of the sky, punch ups, and a split personality as the latest Terminator model Rev- 9 can divide itself. The first ten minutes were fast and furious, fists and bodies flying. Quite a few ‘ouch’ moments!
Dani and her brother work in an automaton factory when the fun starts with Grace and the Rev-9 coming to blows. There follows a car chase in which Dani’s brother is killed and the story begins to develop from there.
Sarah turns up to save Grace and Dani who are not doing that well against the Rev-9  which seems to have the same ability as the T1000 to duplicate anything it touches, but with more than a few upgrades! Grace promptly steals Sarah’s truck to escape. She is not impressed.
Grace is definitely one to have on your side though, a fighter with speed, accuracy and plenty of wallop due to enhancements to her human form, though she is not a cyborg.
I’m not going to give any more spoilers apart from Arnie is now a family man (!) and a good guy, having learned about what it is to be human. You might remember in T2 he had a ‘learning chip’.
With Grace, a stubborn and determined Dani, Sarah and Arnie against the Rev-9, there is plenty of action, a neat twist, and high body count, just what you would expect from the franchise.  They have sort of left it open for a 7th, but I’m not sure where they could take it.

from me, and well worth a look. Better than Genisys IMO.

I am a retired number cruncher with a vivid imagination and wacky sense of humour which extends to short stories and poetry. I love to cook and am a bit of a dog whisperer as I get on better with them than people sometimes! We have recently lost our beloved dog Maggie who adopted us as a 7 week old pup in March 2005. We decided to have a photo put on canvas as we had for her predecessor Barney, and now have three pictures of our fur babies on the wall as we found a snapshot of my GSD so had hers done too. From 2014 to 2017 'Home' was a 41 foot narrow boat where we made strong friendships both on and off the water. We were close to nature enjoying swan and duck families for neighbours, and it was a fascinating chapter in our lives. We now reside in a small bungalow on the Lincolnshire coast where we have forged new friendships and interests.
View all posts by pensitivity101 →
This entry was posted in film/tv/book, Opinions, Personal Thoughts and tagged film review, my opinion. Bookmark the permalink.