Many thanks to Sadje for keeping this challenge going. It has become one of my regular favourites, so long may she continue to do so. 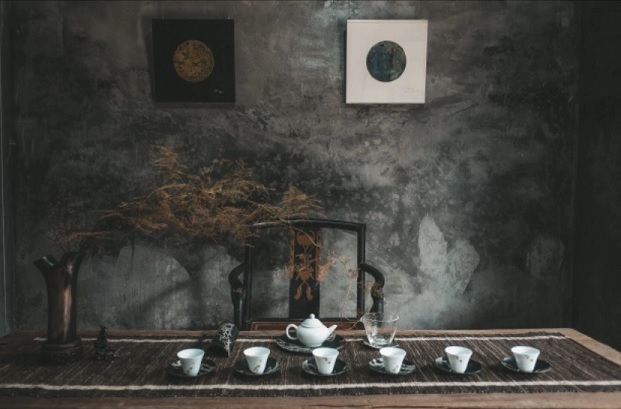 ( For the visually challenged reader, the image shows a table set with six teacups, a teapot and a glass beaker. The wall at the back is adorned with oriental art and a flower arrangement)

She hoped she’d laid everything out correctly.
It was imperative that the cups were placed an exact distance apart, the handles all facing the same way, the teapot and jug just so.
The flowers were dried samples from her garden but in keeping with the ritual.
One false step, and the wrong forces would come to her calling instead of those she sorely sought.
The table started to shake as she incited the ancient words.
The shadows on the wall deepened and started to mass together.
The room started to vibrate as her voice grew stronger.
She began to close her eyes as she felt a power begin to enter her body, and in doing so caught a glimpse of the pictures on the wall, snapping her eyes wide open. Too late she realised she should have removed one to grant access to the spirits she was heralding.
She slumped to the floor in defeat, the cups flying from the table in outrage.
Next time, she vowed. Next time I shall get it completely right.

I am a retired number cruncher with a vivid imagination and wacky sense of humour which extends to short stories and poetry. I love to cook and am a bit of a dog whisperer as I get on better with them than people sometimes! We have an elderly dog called Maggie who adopted us as a 7 week old pup in March 2005. From 2014 to 2017 'Home' was a 41 foot narrow boat where we made strong friendships both on and off the water. We were close to nature enjoying swan and duck families for neighbours, and it was a fascinating chapter in our lives. We now reside in a small bungalow on the Lincolnshire coast where we have forged new friendships and interests.
View all posts by pensitivity101 →
This entry was posted in #flash fiction, blogging, Challenge, photoprompt and tagged #Whatdoyousee, fiction, photoprompt, wdys. Bookmark the permalink.