For visually challenged writers, the image shows a beach in the half-light, bounded by dark dunes and holding a silvery pool of water that mirrors the sky. 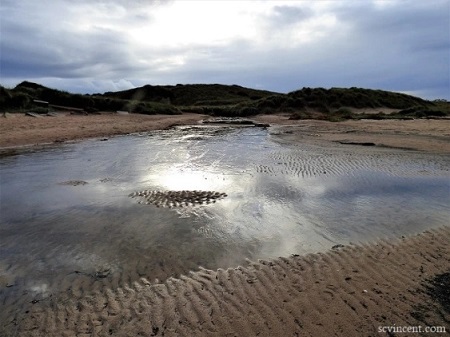 This is The Pool of Tears,
Silver tears dropped by moonlight,
Tinged with bronze as a new day dawns.
The rippled sand caresses as it soothes,
Absorbing the pain of her sorrow.
The Sun asks why his Sister is so sad,
She answers she is alone,
The stars are bright but distant,
Collapsing worlds not yet visible
To the human eye
And by the time they are,
There is nothing left of their origins.
Is this the way it will be?
A single beacon in a night sky
Shedding tears for what has been lost.

I am a retired number cruncher with a vivid imagination and wacky sense of humour which extends to short stories and poetry. I love to cook and am a bit of a dog whisperer as I get on better with them than people sometimes! We have an elderly dog called Maggie who adopted us as a 7 week old pup in March 2005. From 2014 to 2017 'Home' was a 41 foot narrow boat where we made strong friendships both on and off the water. We were close to nature enjoying swan and duck families for neighbours, and it was a fascinating chapter in our lives. We now reside in a small bungalow on the Lincolnshire coast where we have forged new friendships and interests.
View all posts by pensitivity101 →
This entry was posted in blogging, Challenge, photoprompt, Poetry and tagged #write photo, photoprompt. Bookmark the permalink.