I had a really bad night last night, lucky to get about 3 hours sleep in total.
Hubby wasn’t feeling too good so went to bed early. At 8.45 pm it was as light as the afternoon so I walked her round the block TWICE and she did nothing, the little minx.
I locked up and went to bed, doing a bit of blogging before turning out the light.
At ten to midnight, her ladyship wanted to go out, so I got dressed and let her out into the garden where she did a nice big wee, the relief written all over her face. 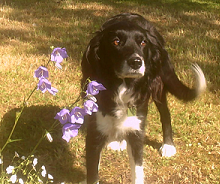 Back in bed, she couldn’t get comfy, was washing her face, rolling about, stretching, snorting, and then coughing, so it was throat massage time and she finally settled……. for ten minutes, then got up to have a drink.
Back on the bed, shuffle, she did the backstroke, then a big huff and was soon snoring.
I wasn’t, because I was hot and bothered.
Next thing I knew, it was 2am and she was coughing again. This happens sometimes when she rolls on her back, especially when it’s hot and dry. She got up and had another drink, then came back into the bedroom and stared at me. Because she couldn’t see, I had to get up and fire the night light so she could jump up and make herself comfy……….. diagonally across the bed, and no way could I get in! 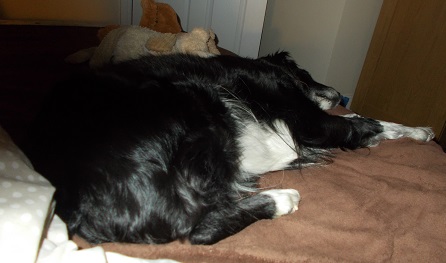 I went to the loo and when I got back seized the extra two inches she’d missed.
I looked at the clock and it was 2.45. I was still hot and couldn’t get my feet comfortable.
Much rolling around later by both of us, when I looked at the clock it was  now 3.25.
I was going to give up and turn the light on, then thought better of it, stuck my feet out of the bottom of the bed and finally managed to get to sleep, my arm resting along her flank.
She got me up at 5.30, did the big business, then back to bed, by which time Hubby was up. We put the washing on and I tried to go back to sleep. Fat chance.

Hubby’s blood test was at 9 o’clock, so the plan was to walk the dog and go up early, then go shopping.
The blood count is good, and the journey into town uneventful, though they were in the throes of closing the road for resurfacing.
Shopping wasn’t such a chore today, not quite so many people, but we were early which made a difference. My lady wasn’t on the door but there were no queues, though inside people were blocking the aisles passing the time of day like old times. No masks visible except mine.

Hubby took the next store, PCSOs still on the door and keeping numbers under control. More people wearing masks, but not as many as you might think. He came out with a box of chicken dog food (£3 for a kilo box compared to £7 for a 2.7 kg bag if you could get it) and some pies for dinner. Yep, naughty having pastry, but we’ve got so fed up with our usual choices and a pie was just the ticket.

My mask broke so I couldn’t go into the third shop, again no queue, but someone on the door monitoring numbers.  We’ve stocked up our freezer and supplies of UHT milk.
Some prices are on the increase though. I bought four very nice medallion pork chops for £2.69, which is an increase on the £2.49 they were, but reduction of the £3.49 they went up to when the Coronavirus first hit. Chicken has rocketed (as expected from our discussion with the dog food rep in the shop last week) and four breasts cost us £4.50. We usually get 8 for around £6. Minced beef is £4.99 a kilo which is up from £4.69 (we get five packs from a tray), milk has stayed the same at 52p a litre, eggs are still £1.18 for a tray of 15 though sadly 3 were broken so we’ll have to use them tomorrow, whereas fresh fruit and veg are around the same depending what you buy, the weight, and where.
I always have a price in my head when I shop and if it’s more, I either buy less or don’t bother. Desiccated coconut is in short supply again, but Hubby was able to get his budget packet soup for 25p (I know, last of the big spenders), and our tins of pineapple in juice at 50p compared to 85p in one discount supermarket (it is a bigger tin but too much for us) or 69p in another.

Coming home we had a detour as we forgot (duh), we unloaded the car then Hubby walked the dog while I got dinner.
The pies were worth it, and I served them with minted potatoes (mint from the garden), carrots, sprouts and green beans.
The washing is dry, and we’ve harvested our first potatoes………… five beauties which we’ll have tomorrow but I don’t know what with yet.

Settling down now for the evening and catching up on my blog.
Hope you’ve all had a good day. Keep well and take care 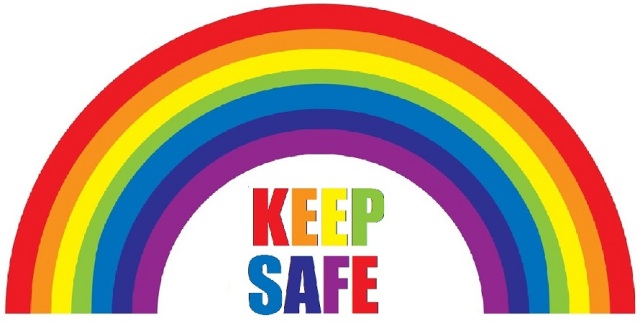 I am a retired number cruncher with a vivid imagination and wacky sense of humour which extends to short stories and poetry. I love to cook and am a bit of a dog whisperer as I get on better with them than people sometimes! We have an elderly dog called Maggie who adopted us as a 7 week old pup in March 2005. From 2014 to 2017 'Home' was a 41 foot narrow boat where we made strong friendships both on and off the water. We were close to nature enjoying swan and duck families for neighbours, and it was a fascinating chapter in our lives. We now reside in a small bungalow on the Lincolnshire coast where we have forged new friendships and interests.
View all posts by pensitivity101 →
This entry was posted in current events, diary and tagged crisis, day to day, general chit chat. Bookmark the permalink.