This week, Michael asks about ‘Tickets’.

It could be tickets you have or had for show you loved or didn’t, simple act of buying a ticket for the bus, train or in a raffle. Some people are said to have tickets on themselves.

Everyone entrusted me with their bingo tickets, so in the end, I was running six.
It was OK once I got the hang of it as the numbers were all in order and in columns for single digits, tens, twenties, thirties, forties, fifties, sixties, seventies, eighties/top of the shop 90. The most number any one column had was three, so lining them all up, I could scan down the column and cross them off as they were called out.
I was very lucky, winning four corners, a top line, middle line, bottom line and even a full house.
Everyone got a prize, except the owner of the 6th ticket, which just happened to be me. 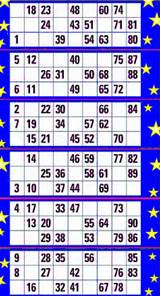 Note:
I got this image from the internet when I did a post before, and I’ve just noticed that it’s wrong. The numbers in the columns should all be in ascending order, so I doubt if any wins would have been honoured here!

I am a retired number cruncher with a vivid imagination and wacky sense of humour which extends to short stories and poetry. I love to cook and am a bit of a dog whisperer as I get on better with them than people sometimes! We have recently lost our beloved dog Maggie who adopted us as a 7 week old pup in March 2005. We decided to have a photo put on canvas as we had for her predecessor Barney, and now have three pictures of our fur babies on the wall as we found a snapshot of my GSD so had hers done too. From 2014 to 2017 'Home' was a 41 foot narrow boat where we made strong friendships both on and off the water. We were close to nature enjoying swan and duck families for neighbours, and it was a fascinating chapter in our lives. We now reside in a small bungalow on the Lincolnshire coast where we have forged new friendships and interests.
View all posts by pensitivity101 →
This entry was posted in #flash fiction, blogging, Challenge, word prompt and tagged Mindlovemisery’s Menagerie, Tale Weaver, word prompt. Bookmark the permalink.