The crows are crawing loudly outside our lounge window.
If I didn’t know better, I would think we were taking part in the opening credits of a remake of Hitchcock’s classic The Birds.

Starlings and their chicks have descended on our lawn back and front over the past few days. Hubby covered the latest lawn seed which is treated with something to deter birds from eating it, though I don’t think they got the memo. But the crows are unusual.

There was one that used to sit on our roof and ‘talk’ to me in the mornings shortly after we moved here. If he wasn’t on our roof, he was on next door’s peering down. 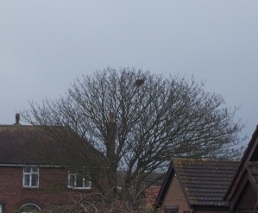 I took these pictures in April 2018 as the nest was being built. As far as I know, it’s still there as we pass this tree every time we walk Maggie round the block as it’s in the beautiful garden just up the road. It’s full of greenery now, so the limbs aren’t clearly visible. It is full of birds though.

We came across this little chap in July 2015, a crow fledgling taking a breather on the wall.
He was so tired, he didn’t have the energy to fly away which is why I managed to get a decent picture.

In the woods, the sound of the crows at dawn and dusk was deafening as they started and finished their day. There was some kind of hierarchy as hundreds randomly lined up on the telephone wires, then in organised synchronization they alighted and went into the copse to roost. It was all over in about ten minutes, and the silence was almost as deafening as their noise.

From what I can see, I think they’re carrion crows and the ones making the most noise could well be youngsters demanding to be fed by their parents. There are about five, though they are making enough noise for twice that, sitting either on the lamp post and the roofs of the properties opposite as frantic black wings fly to and fro.
I’m not a fan of crows, but they are living things and have their purpose in life being Nature’s dustbins. Perhaps because of what is going on in the park they have come into our road in the hope of some easy pickings as several gardens have a few bird feeders out.
Not that long ago I saw two rather large corvids trying to balance on a small feeder to get at the fat balls within. They broke the small tree’s branch and flew off without the spoils.

I am a retired number cruncher with a vivid imagination and wacky sense of humour which extends to short stories and poetry. I love to cook and am a bit of a dog whisperer as I get on better with them than people sometimes! We have an elderly dog called Maggie who adopted us as a 7 week old pup in March 2005. From 2014 to 2017 'Home' was a 41 foot narrow boat where we made strong friendships both on and off the water. We were close to nature enjoying swan and duck families for neighbours, and it was a fascinating chapter in our lives. We now reside in a small bungalow on the Lincolnshire coast where we have forged new friendships and interests.
View all posts by pensitivity101 →
This entry was posted in current events, home, Just a thought, nature, observations and tagged birds, observations. Bookmark the permalink.